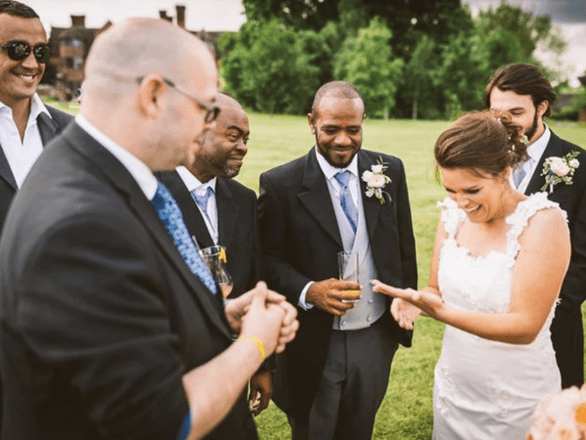 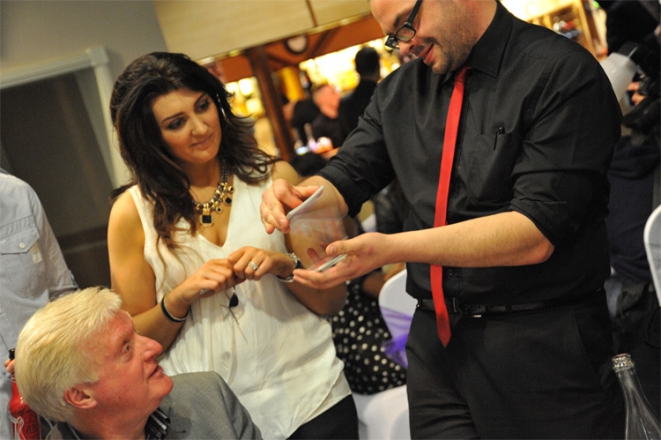 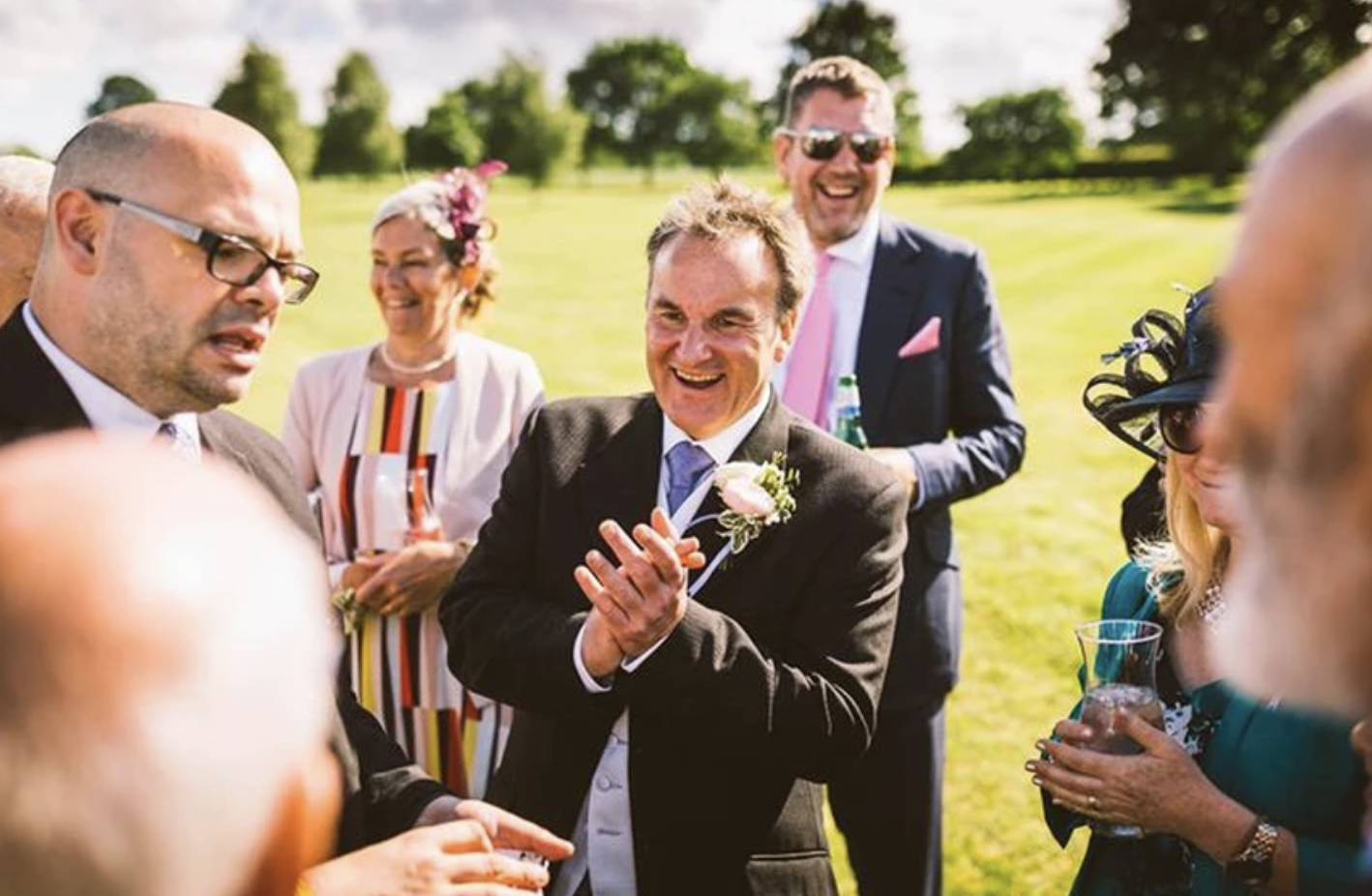 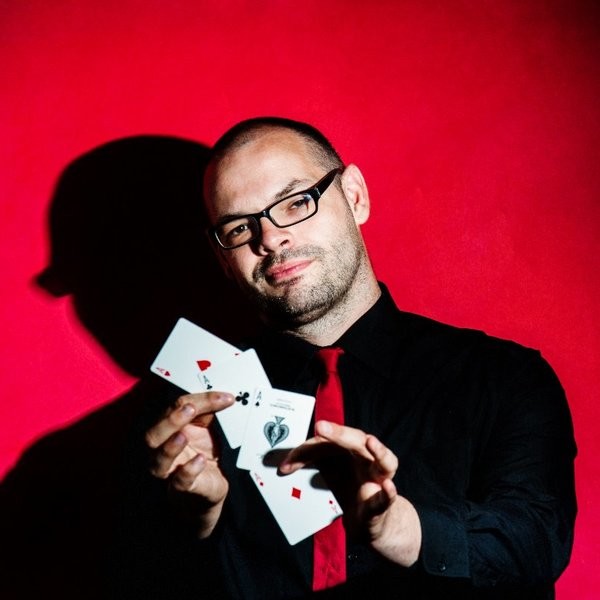 Craig is considered one of the top close up magicians in the UK and has won numerous awards in the field, including British Magical Society Parlour Magician of the Year 2013, and has represented the UK twice in the European Close Up Magic Championships.

“Craig left everyone impressed and astonished.”

Craig left everyone impressed and astonished.

“We invited Craig to perform close up magic at our staff Christmas party. He performed various tricks and illusions, never repeating himself. We found some people were following him to see what else he had up his sleeve. Would definitely book him again.”

Craig was brilliant, our guests were all astounded!

“Big thanks to Craig, he was just what our event needed. He worked his way around the room with ease, wowing people with his magic and entertaining them with his witty banter. His adaptability to the audience was perfect, and we have had lots of positive feedback from our guests. A lovely chap, very flexible and easy to work with. I'd recommend him for any event!”

Unbelievable! Blew everyone away

“Thank you so much Craig for performing at our wedding. Everyone was absolutely spell bound and blown away by your magic! It was the perfect way to keep our guests (and us!) entertained at the end of the meal. A real talking point and memories made on our special day x”

Definitely the highlight of our event

“Craig was amazing and definitely the talking point of our event. Everyone that has spoken to us since has had mentioned how great he was and how they were blown away by his act. He entertained young and old alike with his tricks and you could tell where about he was in the room by the buzz that surrounded him. This is the second time we have chosen Craig for our entertainment and can't praise his professionalism enough.”

“Craig absolutely made the evening at our event. He worked the room incredibly quickly not leaving people out and then kept everyone enthralled with his cabaret set. He was punctual and professional and I would have no hesitation in booking him again. Well done Craig”

Price from £385 + VAT + travel from Staffordshire

Most Alive Network artists travel UK wide and internationally. Get a guide price instantly by clicking the 'get quote' button and entering your event date and location. Make an enquiry and we will liase directly with Close Up Magician Craig to confirm price, availability, and the provide you with a confirmed quote.

Up to 3 hours close up magic

Up to 4 hours close up magic

Craig is known by his peers as one of the greatest sleight of hand artists in the UK. His area of expertise is coin manipulation and he has spent years dedicated to revolutionizing this branch of magic. In 2009 he was described by Magic Week (one of the top journals for magicians) as the greatest living coin manipulator in Europe. Magic Scene also awarded him the distinction of being "The Performer to Watch in 2009". He is currently the co-host of the Wizard Product Review, the largest magic review show in the World.

Craig has published over 30 instructional DVD's on the art of magic and these have proven to be a huge hit worldwide. In 2009 and 2010 he was invited to represent England in the European Championships of Magic. He has won numerous awards through his career including The John Pye award for excellence, the 3SM champion of magic and the Northern Magic Circle magician of the year. He recently became the British Magical Society Parlour Magician of the Year 2013 and has been invited to compete in the International Brotherhood of Magicians Close Up Championships 2013.

Close Up Magic
Close Up Magic is magic that happens right in front of your eyes and in many cases in your own hands. Close Up Magic is perfect for banquets, weddings, gala dinners, summer balls and any other type of event where people are mixing and mingling. There are two really popular types of close up magic.

Table Magic-
This is magic that is performed from table to table and as such is perfect for events such as wedding breakfasts, gala dinners, summer balls etc. Craig will perform a mini cabaret show at each table entertaining your guests in between courses. This is a great conversation starter and gives the entire table something to talk about throughout any event.

Strolling Magic-
This type of magic is perfect for champagne receptions, product launches, pre dinner drinks etc. Basically the magician will mix and mingle between your guests moving from group to group entertaining everyone at the event.

Craig is considered an expert at close up magic and sleight of hand. He will dazzle your guests with intimate miracles that you might have only seen before on TV. Imagine borrowed coins bending in your own hands, imagine coins visibly flying through the air from one hand to the other, imagine borrowed finger rings linking together. All this and more is possible. Your guests and clients will congratulate you on organising a fantastic event - even if you don't want them to.

After booking, speak directly with Close Up Magician Craig.