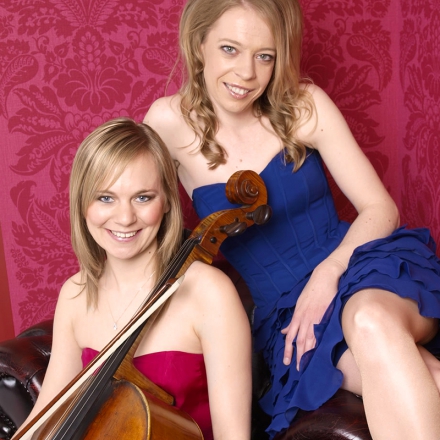 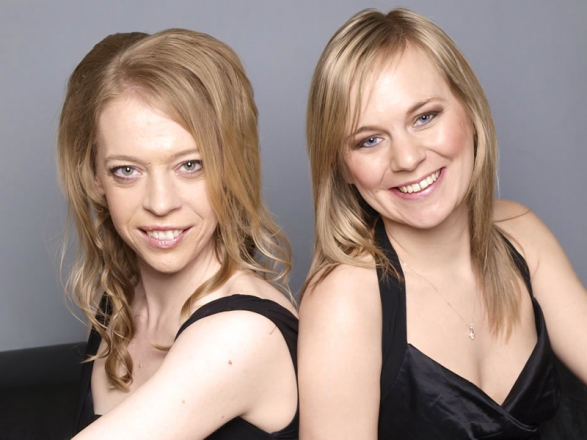 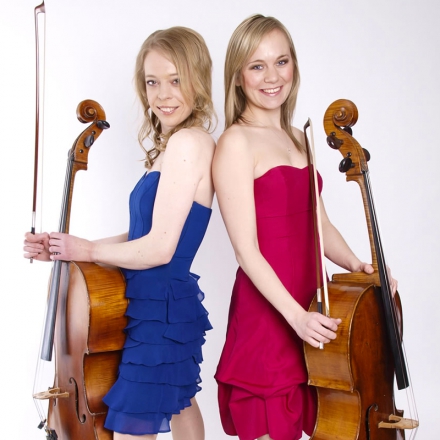 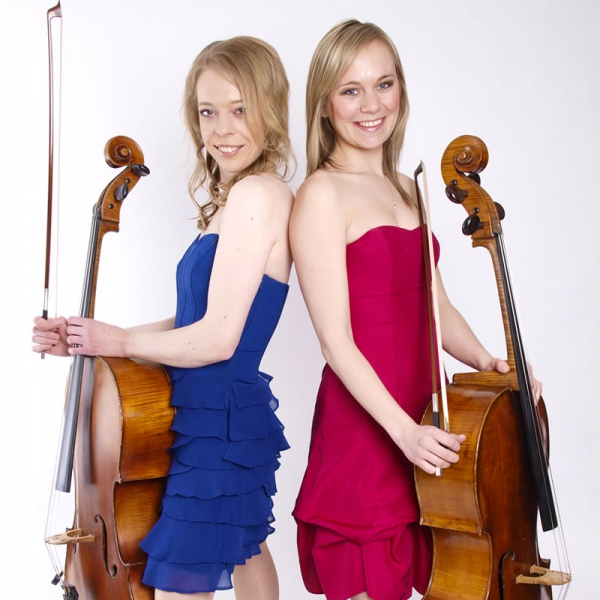 Two women, two cellos: small enough to be a perfect accompaniment for the most intimate functions but also suitable as a different, quirky alternative to the string quartet. We have bases in London and Dorset and are very unique.

“Professional, courteous and performed to an exceptional level.”

Handel: Hallelujah Chorus from The Messiah

Christmas Carols:
Angels We Have Heard on High
Away in a Manger
Coventry Carol
Deck the Halls
For Unto Us a Child is Born
God Rest Ye Merry Gentlemen
Good Christian Men, Rejoice
Hark! The Herald Angels Sing
Jolly Old Saint Nicholas
The Nutcracker
Dance of the Reed Flutes
Dance of the Sugar Plum Fairy
Overture
Trepak
O Little Town of Bethlehem
Silent Night
Sing We Now of Christmas Noel Nouvelet
Wassail Song
We Three Kings of Orient Are
We Wish You a Merry Christmas

Classical
Bach
Jesu, Joy of Man's Desiring from Cantata 147
Sheep May safely Graze from Cantata 208
Arioso from Cantata 156
My Heart ever Faithful from Cantata 68
Air on the G String and Gigue from Suite no 3
Minuets from the Anna Magdalena Bach Notebook

Handel
Entrance of the Queen of Sheba
Allegro from Sonata in F major
Bourree and La rejouissance from The Fireworks
Hornpipe, Air, Allegro, Andante, Bourree and Finale from The Water Music Suite
Hallelujah Chorus from The Messiah

Vivaldi
Selections from Spring, Autumn and Winter from The Four Seasons
Allegro from Concerto Grosso in D minor

Beethoven
Ode to Joy from Symphony #9
Minuet in G

Mozart
Rondo alla Turca from Piano Sonata in A Major
Menuetto and Romanza from Eine Kleine Nachtmusik
Arias from Figaro, Don Giovanni, The Magic Flute
Adagio from Clarinet Concerto in A

Brahms
Variations on a Theme of Haydn: Sicilienne and St Anthony Chorale
Hungarian Dance no 5
Lullaby

Tchaikovsky
Selection from The Nutcracker

Gershwin
I Got Rhythm
Let's Call The Whole Thing Off

Rundgren
Bang the Drum all Day

I was very happy with the service I received from Alive Network in helping me to...

“I was very happy with the service I received from Alive Network in helping me to find Cantabile Cello Duo who were prepared to arrange some songs outside their repertoire and play them at our wedding. Everything happened as I was told it would, and I was very pleased with the communication with Alive Network and the cellists before the event, particularly hearing that they had enjoyed the challenge of re-arranging the pieces for the cello. I was very happy with the cellists professionalism and performance on the day, and would recommend them to others.”

Professional, courteous and performed to an exceptional level.

“Picking a performance was very easy and simple. Although the initial website registration might feel a little automated you receive a very personal and proficient service following your enquiries. There was little to worry about meaning that focus could be put on other parts of the event and we always felt like there was someone in easy reach if needs be. The artists were professional, courteous and performed to an exceptional level. They were the perfect extra piece to our event. They were very adaptable and accommodating to our slightly awkward location and organisational circumstances and our guests all expressed highly positive sentiments. Many thanks. ”

“Alive Network provided a wonderfully professional service, allowing us to trust them with this element of our event and to get on with organising everything else. Cantabile Cello Duo are professional, charming and extremely talented musicians who really made our day. We would, without hesitation, use them again and wholeheartedly recommend Cantabile Cello Duo to anybody else considering using them, they are a delight and we feel honoured to have had them play. Thank you from us both.”

The process of booking though Alive Network was very straightforward and the coo...

“The process of booking though Alive Network was very straightforward and the coordinator was really helpful. Compared to other companies I came across the service was much more efficient and friendly, and the prices more reasonable. The booking system was very straightforward - the website lets you know exactly what you're getting in terms of style, price and availability and then it just took a 5 minute phone call to pay the booking fee. I was very happy with Cantabile Cello Duo's performance at my wedding ceremony and it was nice that they were also able to provide background music during the drinks reception afterwards. ”

Our dealings with Alive Network were professional and uncomplicated, and we woul...

“Our dealings with Alive Network were professional and uncomplicated, and we would use Alive Network again. Cantabile Cello Duo played a varied mix of Christmas music and popular Classics as well as playing an item which they had to arrange specially. Everything went to plan and our guests were impressed by the whole event.”

Based on 2 members performing up to 2 hours

Most Alive Network artists travel UK wide and internationally. Get a guide price instantly by clicking the 'get quote' button and entering your event date and location. Make an enquiry and we will liase directly with Cantabile Cello Duo to confirm price, availability, and the provide you with a confirmed quote.

Founded in the summer of 2004, Cantabile Cello Duo was soon heard at major venues across London. Two women, two cellos: the perfect accompaniment for weddings and events.

Cantabile Cello Duo have performed at venues such as 30 St Mary Axe (the Gherkin), City Hall, Channel 4, The Reform Club, The Renaissance Chancery Court Hotel, The Queen’s House and on board the Cutty Sark. Clients attending these high profile events include the Duke of Edinburgh Sir Nicholas Serota Sir David Attenborough and Anton Mosimann to name a few!

What do two cellos sound like?
Please listen to the sound clips provided; the sound is very rich and the two instruments complement each other perfectly.

What kind of music do Duo Cello play?
Cantabile Cello Duo has an extensive repertoire, ranging from classical favourites to popular songs. We also accommodate special requests if possible (for an extra fee) - we have arranged music as diverse as Handel, Radiohead and Irish jigs!

She graduated with Distinction in the Postgraduate Diploma in Performance from Trinity College of Music in 2005, where she was a scholar studying with Lowri Blake and Joely Koos. She was principal cellist of the Symphony and Chamber Orchestras and won many prizes including the Classical Concerto and the Solo Bach Competition. Pippa gained her undergraduate degree at the University of Birmingham, where she led all the orchestras, won the Concerto Competition and was invited to perform the Saint-Saëns Cello Concerto with the University Sinfonia.

Pippa has been giving recitals as soloist and chamber musician to great acclaim, including a platform at the Wigmore Hall and a recent performance of Tchaikovsky’s Rococo Variations with St Paul’s Sinfonia as well as education work with the City of London Sinfonia. She is a member of the Sonas Quartet with whom she has travelled the world as guest entertainers on board Saga Cruise Ships.

Ruth Beedham studied at Trinity College of Music with Alison Wells and Natasha Pavlutskya. Whilst at Trinity, Ruth won the Leonard Smith Prize for string duo and also gained a scholarship to continue her studies with Natasha on the postgraduate diploma course. Ruth now studies with Naomi Butterworth.

Ruth performs regularly as a chamber musician. She is a member of The Backman Trio who give recitals for music clubs and societies across the country and have recently performed at St James’s Piccadilly and Blackheath Halls. After a successful tour of Finland in summer 2009 they have been invited back by popular demand in 2011.  Ruth has also been guest soloist with Wandsworth Symphony Orchestra, and performed Tchaikovsky’s Pezzo Capriccioso with St Paul’s Sinfonia in April 2008.

Ruth also has several teaching posts including cello teacher at City of London School for Boys. In her spare time, she enjoys running and in 2006 ran the London Marathon. Ruth hopes to run it again sometime soon and preferably faster!

Testimonials
Thank you so much for playing at our wedding. You were amazing and we really appreciate the effort you went to in order to include our special request.
-Kendra & James, Mandarin Oriental Kinghtsbridge

We very much appreciated your music and it contributed to the success of the evening
- Ursula Jost Carraro, The Swiss Church Project

Thank you so much, we really enjoyed the recital.
- Caroline Scott, Country Life Magazine

Many thanks for playing such beautiful music on our wedding day. Your performance was brilliant and really contributed to our perfect day.
- Heidi and Dom, Danson House