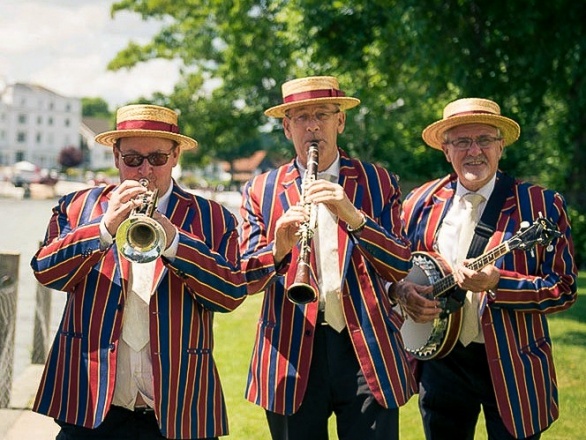 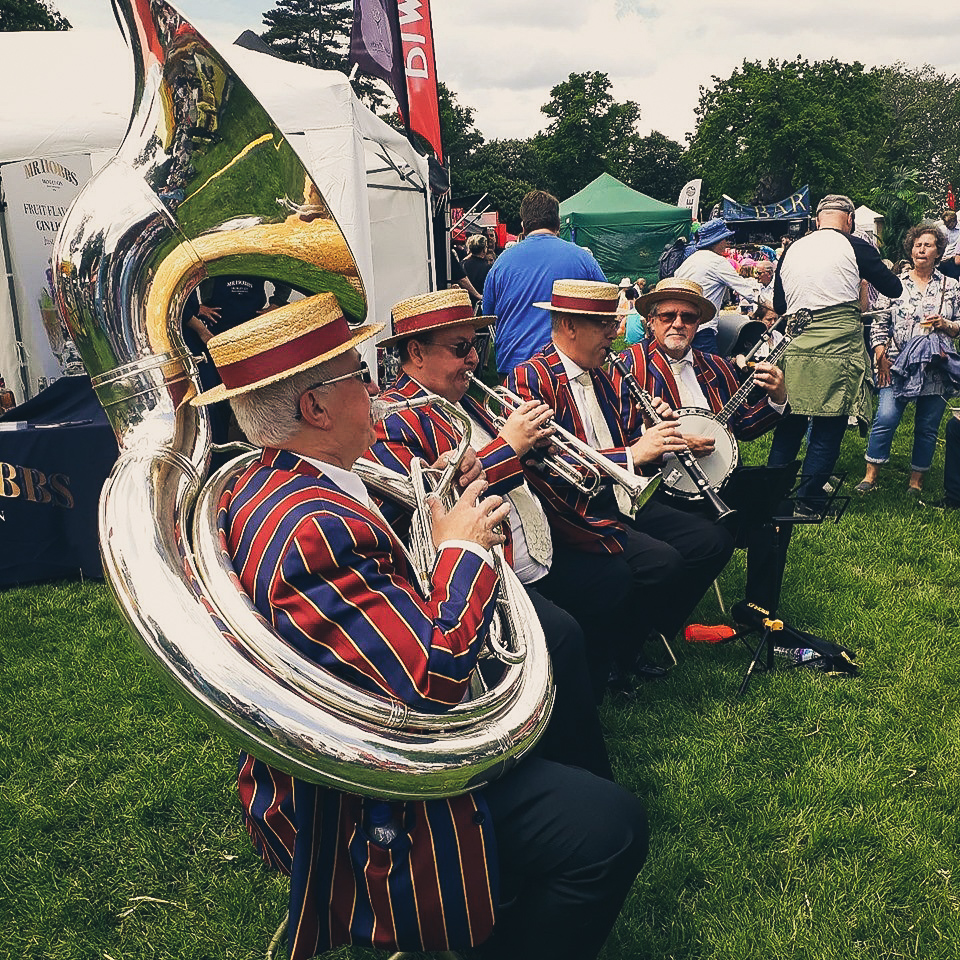 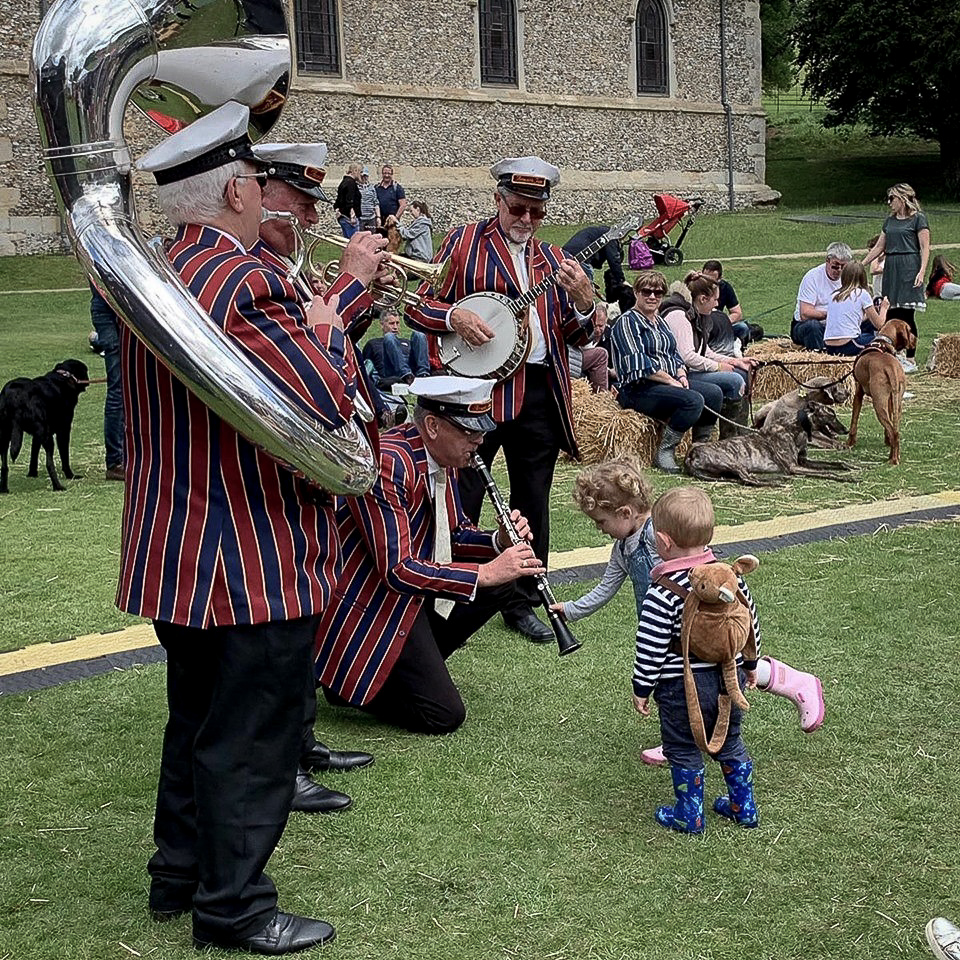 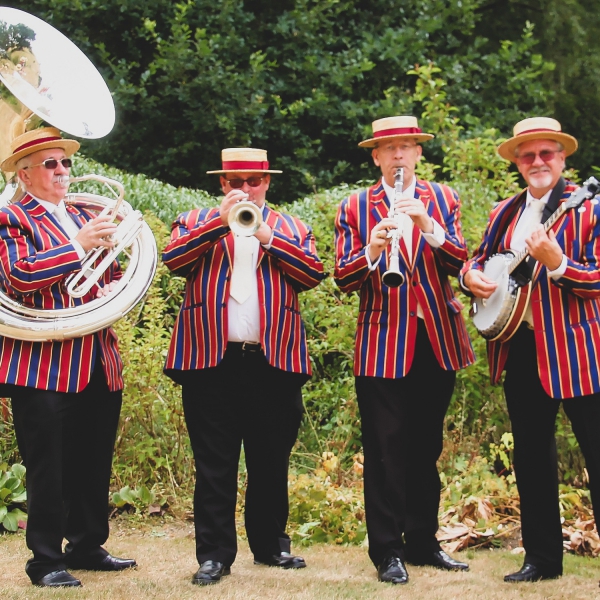 Burgundy Boater Band are an experienced, professional, traditional jazz quartet providing music for any occasion. Their tunes, jazz, ballads and 20’s pop songs have a beginning, middle and, end which most people like.

Burgundy Boater Band performing When Youre Smiling - Available from AliveNetwork.com

Ace In The Hole
After You've Gone.
Ain't Misbehavin'
Ain't She Sweet
Alexander's Ragtime Band
Algiers Strut.
All Alone By The Telephone
All I Do Is Dream Of You
All Of Me
All The World Is Waiting For The Sunrise
Am I Blue
Amazing Grace
Apex Blues
April Showers
At Sundown
At the Jazzband Ball.
Aura Lee
Avalon
Babyface
Ballin' The Jack
Bare Necessities (The)
Basin Street Blues
Battle Hymn Of The Republic
Beale St Blues.
Beer Barrel Polka.
Bei Mir Bist Du Shoen
Big Butter And Egg Man
Bill Bailey
Black Cat On A Fence
Blue Room
Blueberry Hill
Bourbon Street Parade
Brahms' Lullaby
Bring Me Sunshine
Bugle Boy March
Button Up Your Overcoat
Bye Bye Blackbird.
Can't Help Lovin' Dat Man
Canal Street Blues
Careless Love
Carry Me Back To Old Virginia.
Chimes Blues
China Boy
Chinatown. My Chinatown
Congratulations
Crazy Rhythm
Creole Love Call.
Curse Of An Aching Heart
Dans Les Rues D' Antibes
Darktown Strutters Ball.
Deed I Do
Delia Gone.
Dinah
Do You Know What It Means To Miss New Orleans.
Doctor Jazz.
Don't Sit Under The Apple Tree
Down By The Riverside.
East Coast Trot
Embraceable You
Everybody Loves My Baby.
Exactly Like You
Fair And Square In Love
Fidgety Feet.
Floating Down The Old Green River.
For Me and My Girl.
Frankie and Johnnie
Georgia On My Mind.
Get Me To The Church On Time
Girl Of My Dreams
Hello Dolly.
High Society
Hindustan
Honeysuckle Rose
I Can't Give You Anything But Love
I Got Rhythm
I Love Paris In The Springtime
I'll Be With You In Apple Blossom Time
I'm Confessing That I Love You
I'm Forever Blowing Bubbles
I'm Going To Sit Right Down And Write
I'm Sitting On Top Of The World
I've Found A New Baby
Ice Cream.
If I Had You
If you knew Susie
In The Mood
In The Shade Of The Old Apple Tree.
Indiana
Is It True What They Say About Dixie?
Isle Of Capri
It Don't Mean A Thing If It Ain't Got Swing
It Had To Be You
It's A Long Way To Tipperary
It's A Sin To Tell A Lie
It's Only A Paper Moon
Ja-Da
Jazz Me Blues
Jeepers Creepers
Joe Avery's Piece
Just A Closer Walk With Thee
Just A Little While To Stay
King Of The Swingers
Lady Be Good.
Lily Of The Valley
Little Brown Jug
Love Nest
Ma (He's Making Eyes At Me)
Mack the knife
Making Whoopee
Margie
Maryland, My Maryland
Memories Of You
Mood Indigo.
Muppet Theme
Muskrat Ramble
My Blue Heaven
My Memphis Baby
My Old Man Said Follow The Van
My Old Man's A Dustman
Nagasaki
Nearness Of You (The )
Nobody Knows The Trouble I've Seen
Nobody's Sweetheart Now
Oh Baby
Oh You Beautiful Doll
Old Rugged Cross
On Mother Kelly's Doorstep
On The Sunny Side Of The Street
Over The Waves
Pack Up Your Troubles
Pasadena
Pennies From Heaven
Please Don't Talk About Me....
Pretty Baby
Roses Of Picardy
Rosetta
Royal Garden Blues
Running Wild
S Wonderful
Sentimental Journey
September In The Rain
Sheik Of Araby
Shine
Should I Reveal
Slow Boat To China
Some Of These Days
Somebody Stole My Girl
Someday You'll Be Sorry
South
Squeeze Me
St James Infirmary
St Louis Blues
St Phillip Street Breakdown
Stranger On The Shore
Strike Up The Band
Strutting With Some Barbeque
Summertime
Sweet Georgia Brown
Sweet Sue
Sweethearts On Parade
Teddy Bear's Picnic
That's A Plenty
Those Magnificent Men In Their Flying Machines
Tiger Rag
Till We Meet Again
Tin Roof Blues
Tishomingo Blues
Treasure Island
Tuxedo Junction
Undecided
Up A Lazy River
Varsity Drag
Walk Right In
Walk Thro' The Streets Of The City
Walking With The King
Washington And Lee Swing
Way Down Yonder In New Orleans
Wedding March
What A Wonderful World
When Somebody Thinks You're Wonderful
When The Saints Go Marching In
When You And I Were Young Maggie
When You're Smiling
When Your Hair Has turned to Silver
While We Danced At The Mardi Gras
Whispering
Whistling Rufus
Who's Sorry Now?
World Is Waiting For The Sunrise
Yes Sir Thats My Baby
You Are My Sunshine
You Took Advantage Of Me
You're Driving Me Crazy

“The band were exactly as I'd hoped they'd be and completely understood the atmosphere we were trying to create. The musicians themselves were a pleasure to deal with prior to the event and then on the day itself. Thank you! ”

“Really great musicians and played all the Jazz tunes we had requested It was a very hot day but they played in all for over 3 hours. Simply Perfect”

“Our guests raved about the band.”

“Our guests raved about the band.”

“Martin and the band were just fantastic. They added such flair to our wedding as the guests arrived, and everyone absolutely loved them. Thank you!”

Price from £646 + travel from Hampshire

Most Alive Network artists travel UK wide and internationally. Get a guide price instantly by clicking the 'get quote' button and entering your event date and location. Make an enquiry and we will liase directly with Burgundy Boater Band to confirm price, availability, and the provide you with a confirmed quote.

Burgundy Boater Band are an experienced professional traditional jazz quartet providing live music for any occasion. They play tunes that have a beginning a middle and an end which most people like and are suitable for listening to at a concert or in the background or for dancing.

The instruments are acoustic (not dependent on electricity) which makes this jazz band versatile as they can perform anywhere and easily relocate. They take up little space and play live music for any occasions as quietly or loudly as you wish. As well as their nineteen twenties style striped blazers they have evening dress tailcoats for the formal twenties white tie and tails theme.

They can lead processions of wedding guests from ceremony to reception and they have led funeral corteges.

They are equally at home providing the music at a dinner dance or playing in the background at a reception or party. They have played to all size of audience from 750 people, at Wembley Conference Centre down, to 6 people in their front room.

A typical wedding day could include the band playing gentle background music to entertain the guests on arrival at the wedding or wedding reception while the photos are being taken, then moving to the dance floor to play music for dancing at whatever tempo the guests want. Sometimes they've led the procession of wedding guests from the ceremony to the wedding reception.

Trumpet,  Andy Chislett has played at many top venues guesting with various bands. He spent 8 years playing on NCL and P&O cruise ships and has performed on many recordings. He has been playing with Acoustic Jass since 2003 .

Clarinet, Richard Cook started playing Jazz after leaving the Army in 1982. He ran his own band ten years which included successful tours of France & Germany.  He joined Acoustic Jass at the beginning of 2011.

Banjo, Doug Kennedy, a very experienced player has played with most of the well known London bands and frequently tours Europe has played with Burgundy Boater Band since October 2000

Sousaphone, Bass Saxophone and leader of the band, Martin Jones learnt to play in a brass band, in 1995 he was invited to join three other musicians to form a quartet, due to them dropping out (for personal reasons) in 1998, Martin found himself with bookings and no band! so Burgundy Boater Band was formed. In 2001 he started playing bass sax to give added colour to the rhythm section.