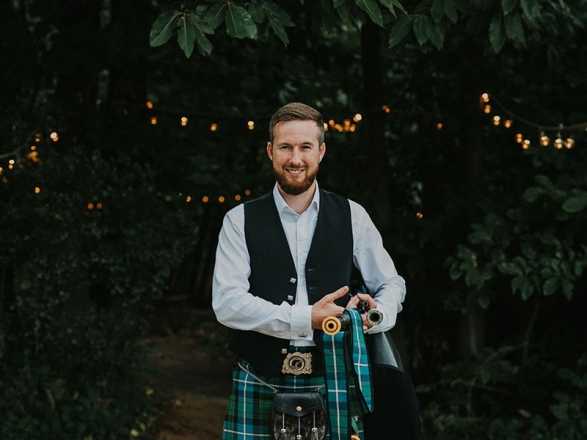 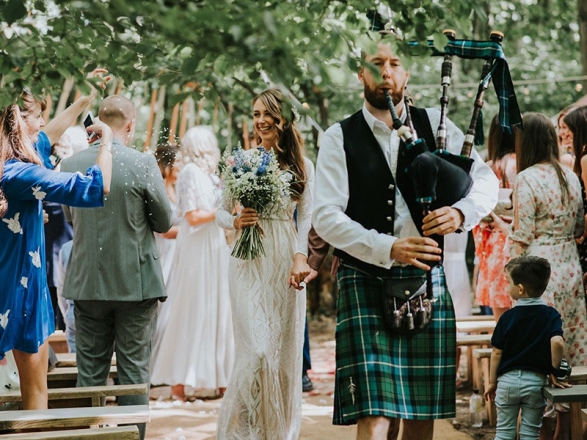 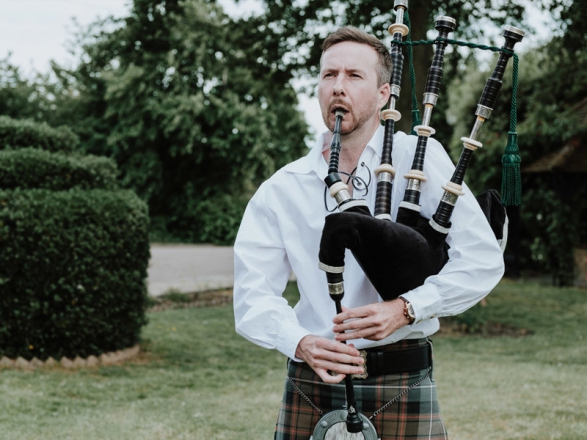 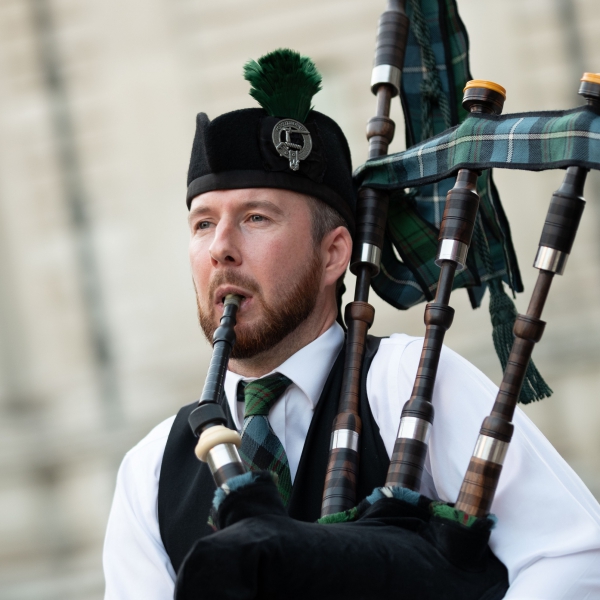 Britain's South East Bagpiper has been playing the great highland bagpipes for 22 years. His professionalism and experience in front of crowds of all sizes puts him in perfect stead to perform for all occasions. If you would like to add a Scottish element to your celebration, making your day/night special and distinct to any other, do not hesitate to make contact. He is based in the south-east and the London area of England but can travel to accommodate your specific needs.

“Could not have hoped for more!”

Could not have hoped for more!

“Matthew was fantastic from start to finish and all of our guests commented on how much they enjoyed his performance! My husband is Scottish and all of his family flew down to Essex for our big day. It made such a difference having a bit of Scottish tradition at the wedding and it brought everyone together. Matthew was a great sport, even partaking in the tradition of having a 'nip' of whiskey after piping us in to our dinner. Can't recommend him highly enough!”

Everyone appreciated The South East Bagpiper a lot

“Matthew contacted us beforehand, and communication was good and straightforward. He arrived and performed as requested, and the quality was very good. Everyone there appreciated it a lot.”

“Absolutely amazing and performed more than expected, much to everyone's pleasure. It's not easy to play the bagpipes and it takes great energy which he had in abundance. He looked the part too, every guest was totally in awe and the happy couple suitably surprised and happy everyone had great things to say about him”

“Excellent value for money. Would ask for him again. Very nice man, very smiley and nothing was too much trouble. He said he enjoyed his day too.”

“Totally professional, fantastic Bagpiper who rocked our wedding. All our friends and family commented on the talent of this young man. Huge thanks have to go to Britain's South East Bagpiper for helping make our wedding day so wonderful and enjoyable we'd highly recommend his services.”

Most Alive Network artists travel UK wide and internationally. Get a guide price instantly by clicking the 'get quote' button and entering your event date and location. Make an enquiry and we will liase directly with Britains South East Bagpiper to confirm price, availability, and the provide you with a confirmed quote.

Britain's South East Bagpiper has been playing the Great Highland Bagpipes since he was 10 years old and through-out his piping career he has played as an individual solo performer at multiple events across a wide range of platforms. He has performed at prestigious venues such as the Royal Albert Hall, Hampton Court Palace, The Intercontinental in Mayfair (Ldn), Saxon Hall, Birkbeck University, Sony Pictures and plays regularly on the Great British Pullman steam train (otherwise known as the 'Orient Express').

Highlights:
Britain's South East Bagpiper has appeared on a range of well-known TV and Radio programmes, from Chris Evans’ Breakfast Show on BBC Radio 2 and Absolute Radio, to Made in Chelsea and The Last Leg: Correspondents. He has also featured as a session musician with Right Said Fred and for Walkers Crisps, and has performed with The Chieftains, and the international bestselling classical group, Il Divo.

Britain's South East Bagpiper is an accomplished skilled professional, highly versatile and flexible in his approach. He always works with his clients to ensure that every performance delivers the right impact for the intended audience.

Weddings:-
Having a bagpiper at a wedding is lucky, so why not let the bagpipes bring that luck to the first day of the rest of your lives? He can provide the below services, which can be be altered to cater for your specific requirements to make your day as unique as possible, including:

Burns' Suppers:-
Burns’ Suppers are a well-known Scottish celebration. There main purpose is to celebrate the life and birthday of poet Robert Burns who blessed Scotland with his poems, songs, and stories over 250 years ago. A Scottish inspired bagpiper compliments the day superbly and gives the evening a traditional ambiance. The haggis should not be brought to the table other than to the sound of the Great Highland Bagpipe!

Britain's South East Bagpiper can provide the below services which can be altered to cater for your specific requirements to make your celebration as unique as you feel necessary:

Birthdays:-
Why not have something different at your birthday. The bagpipes will get the crowd clapping and make your birthday distinct and special.

Britain's South East Bagpiper can provide a selection of contemporary tunes can be provided to sing along to, such as:

Funerals:-
A funeral is a time for reflection and remembering the life of a loved one. A bagpiper playing at the beginning or end is sure to leave a lasting memory.

Britain's South East Bagpiper can provide music for both a burial or cremation. Below is an outline of what could be arranged:

Media:-
Britain's South East Bagpiper has appeared on a range of well-known TV and Radio programmes, from Chris Evans’ Breakfast Show on BBC Radio 2 and Absolute Radio, to Made in Chelsea and The Last Leg: Correspondents. He has also featured as a session musician with Right Said Fred and for Walkers Crisps, and has performed with The Chieftains, and the international bestselling classical group, Il Divo.

Band Involvement:
Britain's South East Bagpiper has always been closely affiliated with the pipe band fraternity playing with a total of three bands to-date. The first was in 1995 called the Southend Scottish Pipe Band, then after disbanding in 2002 he joined the Sutherland Pipes & Drums based in Corringham, where he has played in many festivals, fetes, military tattoos, remembrance parades and Christmas celebrations.

Deciding to progress his piping onto the next level, in 2012 he joined the Essex Caledonian Pipe Band. Being a competition band, he has been competing up and down the country, and internationally since, including the quartets, mini bands and Jim McGuinn memorial contest in Broxbourne, the local Scotland in Colchester Competition, the Cowal Highland Gathering in Dunoon and the Scottish Weekend Competition in Belgium.

Past and present results across all competitions have been very positive, picking up 1st, 2nd or 3rd place honours.