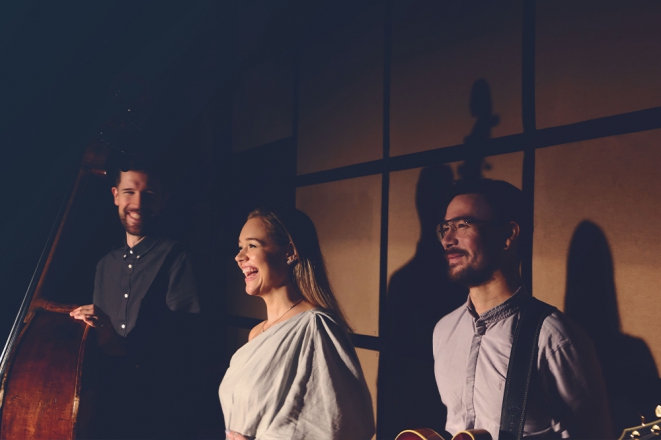 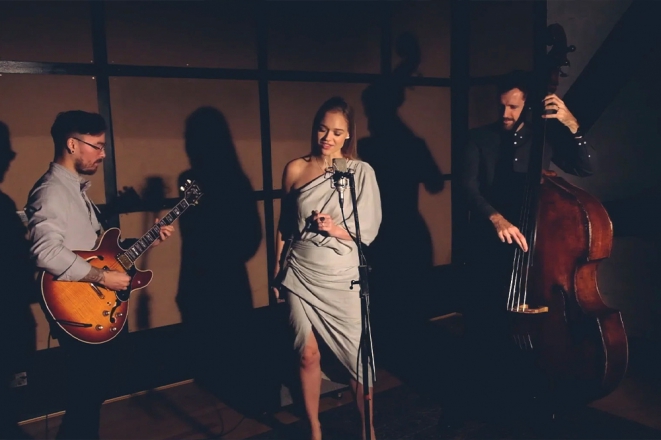 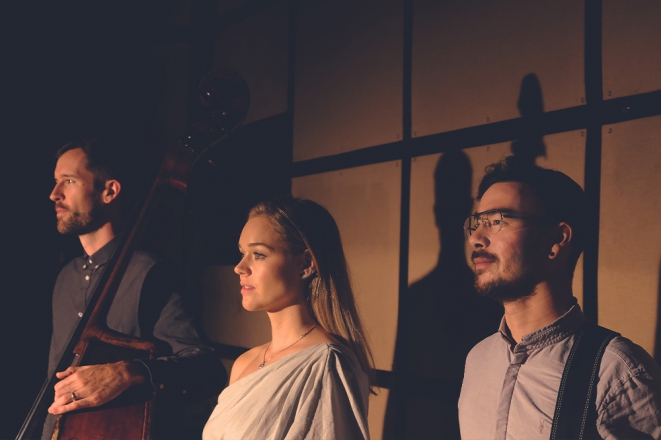 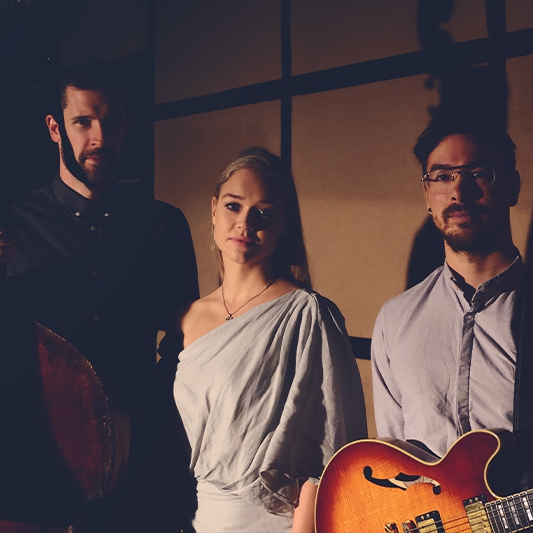 Fusing stunning vocals with creative guitar & lively bass, jazz trio Blue Sanctuary will add warmth & sophistication to your occasion. Covering everything from heartfelt jazz standards to jazzed up pop anthems & other classics, this in demand trio have a wealth of experience entertaining at hundreds of events across the UK.

“The perfect touch to our wedding”

A Foggy Day
A Fine Romance
A Ship without a Sail
All of You
All I Do is Dream of You
All the Things You Are
April in Paris
April Love
Autumn in New York
Anything Goes
Baby, It's Cold Outside
But Not For Me
Begin the Beguine
Bewitched, Bothered and Bewildered
Blue Moon
Blue Room
Carolina in the Morning
Come Rain or Come Shine
Cheek to Cheek
Don't Blame Me
Embraceable You
Exactly Like You
Ev'ry Time We Say Goodbye
Fascinating Rhythm
Fly Me to the Moon
Falling In Love with Love
Georgia on My Mind
Good Morning
Girl from Ipanema
Have You Met Miss Jones?
How Deep Is The Ocean
I Can’t Get Started
I Got Rhythm
I Can't Give You Anything But Love, Baby
I'm in the Mood for Love
It's a Most Unusual Day
If I Were a Bell
I'm Beginning to See the Light
I'll Be Seeing You
In a Sentimental Mood
It Don't Mean a Thing (If It Ain't Got That Swing)
It Had to Be You
I'll See You in My Dreams
I've Got You under My Skin
I Get a Kick Out of You
In the Still of the Night
It's De-Lovely
I Concentrate on You
I Could Write a Book
It's Easy To Remember
It Never Entered My Mind
I Didn't Know What Time It Was
Isn't It Romantic?
Just One of Those Things
Lazy River
Little White Lies
Long Ago (and Far Away)
Love Me or Leave Me
Love Is a Many-Splendored Thing
Love Is Here to Stay
Luck Be a Lady
Let's Do It, Let's Fall in Love
Love for Sale
Little Girl Blue
Lover
Lullaby of Birdland
Makin’ Whoopee
Manhattan
Mood Indigo
My Baby Just Cares for Me
My Blue Heaven
My Heart Belongs to Daddy
My Romance
My Funny Valentine
Mimi
My Heart Stood Still
Mountain Greenery
My Way
Moondance
Moon River
Night and Day
Ol' Man River
Over The Rainbow
One For My baby
On A Slow Boat to China
On the Sunny Side of the Street
Pick Yourself Up
Satin Doll
Singin’ in the Rain
Someone to Watch over Me
'S Wonderful
Summertime
Sophisticated Lady
Stardust
Stormy Weather
Strike Up the Band
Smoke Gets in Your Eyes
Standing on the Corner
So in Love
Slaughter On 10th Avenue (ballet)
Spring Is Here
Stranger In The Night
Taking A Chance on love
Take the 'A' Train
Tender is the Night
Temptation
That Old Feeling
There’s No Business Like Show Business
The Nearness of You
The Man I Love
They Can't Take That Away from Me
The Way You Look Tonight
The Folks Who Live On the Hill
The Song Is You
Toxic
Too Darn Hot
The Lady Is a Tramp
Thou Swell
The Most Beautiful Girl in the World
This Can't Be Love
Yesterdays
You Were Meant for Me
You’re Driving Me Crazy
You're the Top
You'd Be So Nice to Come Home To
You Do Something to Me
You Took Advantage of Me
White Christmas
With A Song in My Heart
What Is This Thing Called Love?
Where or When
What a Wonderful World

The perfect touch to our wedding

“Blue sanctuary (Sigrid) was amazing. Very professional, polite and friendly. Unfortunately our original singer had to cancel because of losing her voice so Sigrid kindly stepped in to cover. We had lots of comments to say how amazing she was. Unfortunately we didn't get to hear much ourselves as we were always busy but the guests were very impressed!”

“Thank you, you were amazing and so friendly - a wonderful addition to our corporate Christmas party :) I would 100% recommend”

“I couldn’t have been more happy. They made our drinks reception so wonderful and their music was beautiful. Really easy to deal with as well. I couldn’t recommend enough!”

Most Alive Network artists travel UK wide and internationally. Get a guide price instantly by clicking the 'get quote' button and entering your event date and location. Make an enquiry and we will liase directly with Blue Sanctuary to confirm price, availability, and the provide you with a confirmed quote.

Blue Sanctuary will learn and perform a song of your choice.

Blue Sanctuary can finish performing at 1am if requested.

Blue Sanctuary are a professional jazz trio that consists of singer Sigrid, guitarist Charlie and bassist Rob. The trio performs everything from heartfelt jazz standards to jazzed up pop anthems and other classics, all while making them their own.

Hailing from Oslo, Sigrid is a 1st Honours Degree BIMM London graduate & solo artist, who has worked as a session singer, songwriter & producer in various projects, including alongside Kygo, Crystal Fighters & Maverick Sabre. With her captivating stage presence and distinctive style, Sigrid’s vocals range from warm and soft to playful and energetic, and her influences vary from Frank Sinatra to Alicia Keys.

Born and bred in London, Charlie is a jazz and pop guitarist. He graduated from Guildhall School of Music and Drama with a degree in jazz and has since performed with artists such as Maverick Sabre, Kelis, All Saints and Daley as well as being a successful artist in his own right. Charlie is well known for his skills as well as for his creative and inventive ear, giving every song its own flavour.

Rob is a freelance electric and double bass player working and living in London. Since studying jazz at MDX university, Rob has gone on to perform with many great musicians both in the UK and around the world, including Shirley Bassey and Blake. With his thoughtful melodic ear, Rob adds a depth and swing to the line up, just the way a double bass should.

Together, Blue Sanctuary’s stunning vocals, creative guitar and lively bass will add a touch of warmth and sophistication to any occasion.