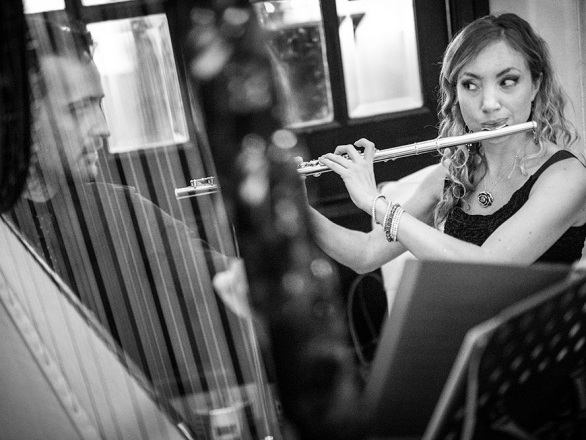 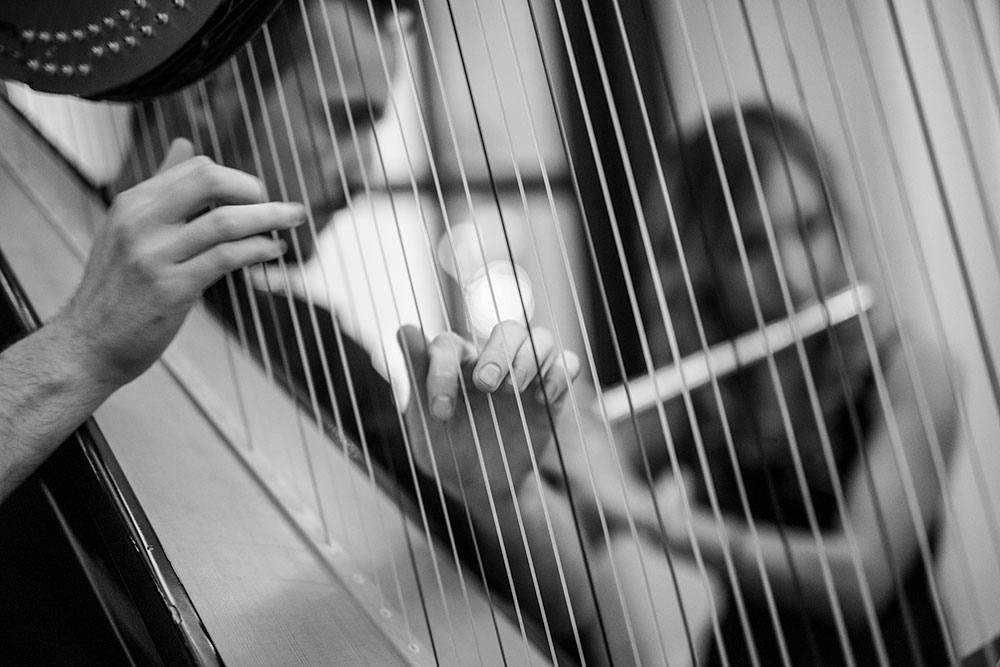 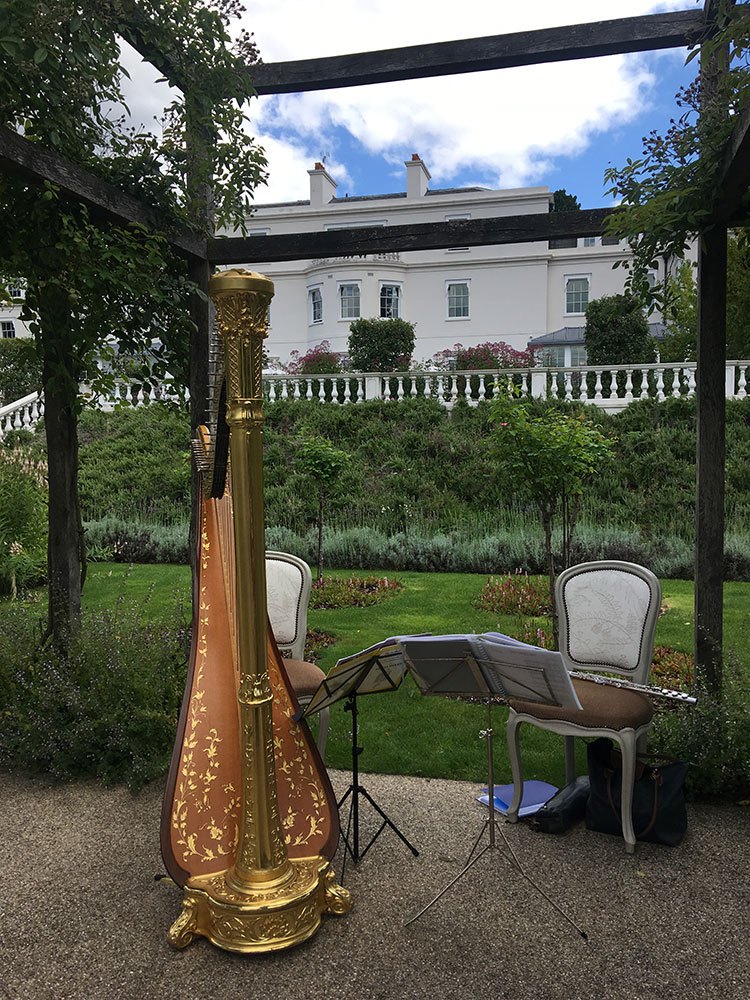 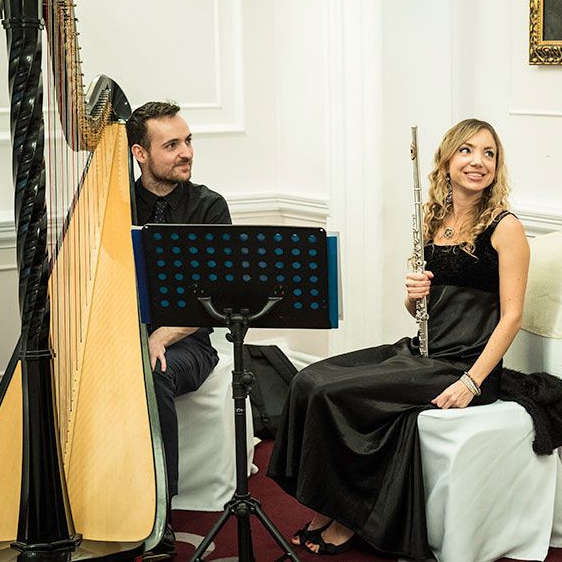 Flute and Harp ensemble Astral Duo perform everything from The Beatles, Eva Cassidy and Travis to Bach, Debussy and Wagner, providing the perfect accompaniment to your special day.

“They played beautifully at the ceremony”

They played beautifully at the ceremony

“We didn't get to see them for long enough but all our guests thought they were incredible! We can't wait to look back at the videos and see them perform again. Also thank you so much for the gift, my partner was really blown away by it, so thoughtful.”

“I wanted to surprise my wife with a harps and flute. From beginning to end rosie was brilliant, from the recommendation for the entrance to the signing at the end. I couldn't of asked for a better team. Excellent team work, I would recommend to book rosie and her team 100000%. Thank you for making our day extra special.”

They helped us create the most fantastic reception

“A fantastic duo who really set the scene at our wedding reception. Thank you so much to both of you. Brilliant communication and very flexible allowing us to make our event unique. Rosie spent a lot of time before the event to make sure we had exactly what we wanted.”

Amazing performance from this duo.

“Rosie and Tom came to perform at an opening evening promotional event we had, in High Wycombe, their presence made for a fantastic evening and I highly recommend them. Many thanks to Rosie and Tom for turning a good evening into and excellent evening. The booking process through Alive Network was easy and faultless, thanks Gemma :)”

“Rosie was extremely helpful with choosing the music and helping us figure out what was right for the day, we had so many positive compliments about the music. Everyone was throughly impressed with the wide range of music they could play for all age groups, Everyone at the wedding complimented on their skills. Will book them again in a heart beat.”

Based on 2 members performing up to 1 hour

Most Alive Network artists travel UK wide and internationally. Get a guide price instantly by clicking the 'get quote' button and entering your event date and location. Make an enquiry and we will liase directly with Astral Duo to confirm price, availability, and the provide you with a confirmed quote.

Astral Duo are well known for providing performances of the highest standard, creating a unique and captivating atmosphere suitable for any occasion.

Based in London, Rosie and Tom are in high demand as both an ensemble and as soloists. Between them they have performed at the Royal Festival Hall, Royal Albert Hall, Barbican Centre, St. James' Palace, Buckingham Palace, Wigmore Hall, Windsor Castle, The Ritz, The Waldorf and regularly appear as classical artists on cruise ships such as Queen Victoria, Queen Mary and P&O Cruises.

Tomos- Harp
Tomos is an international award-winning professional harpist with over 15 years of performing experience, and has played for royalty, including a solo performance for HM the Queen. He has played on prime-time national TV and in venues such as the Hilton Hotel at Afternoon Tea, and has performed extensively across Europe and as far as Japan.

He gained his Master's degree with very high distinction from Trinity Laban Conservatoire of Music & Dance and was also awarded the prestigious John Marson prize for an outstanding harpist, and he received First Class Honours for his Bachelor of Music undergraduate degree. Other prizes include First Medal at the UFAM international competition in Paris, 1st prize at the national Eisteddfod in Wales, trophy for the most outstanding musician of the festival at the South Glamorgan Festival for Young Musicians and many more.

Rosie- Flute
Rosie gained a Distinction in Postgraduate Flute from Trinity College of Music in London and a First Class Honours in her undergraduate BA Music degree from Southampton University.

She is a professional flautist based in London and has toured in England and across Europe with the pop/performance-art orchestra The Irrepressibles, and recorded on their debut album Mirror Mirror. She has recorded for adverts and theatre productions, including at Air studios and BBC Maida Vale. She plays in classical ensembles, for musical theatre productions and plays in Damask Duo (flute & piano) for recitals in the UK and on Cunard and P&O cruise lines.

Please Note: On very rare occasions a high quality dep may need to be used. If required the dep will be experienced playing together as part of a duo.