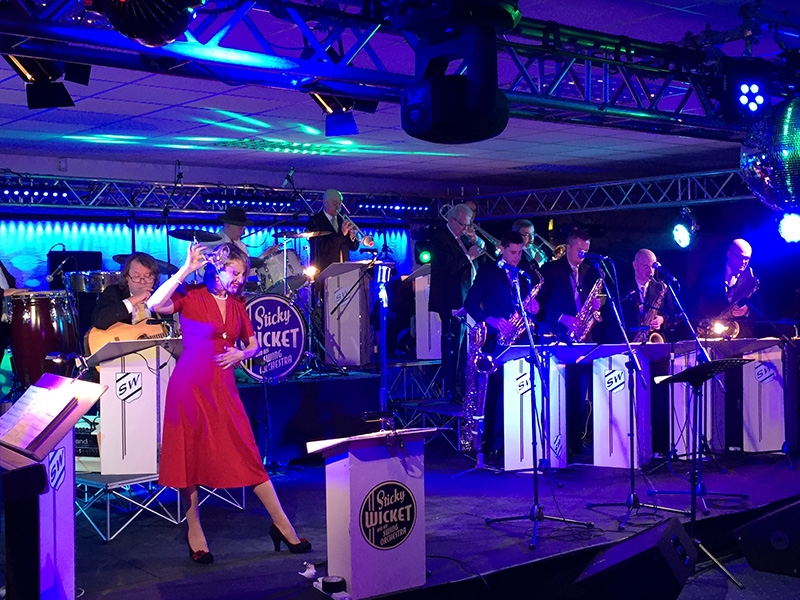 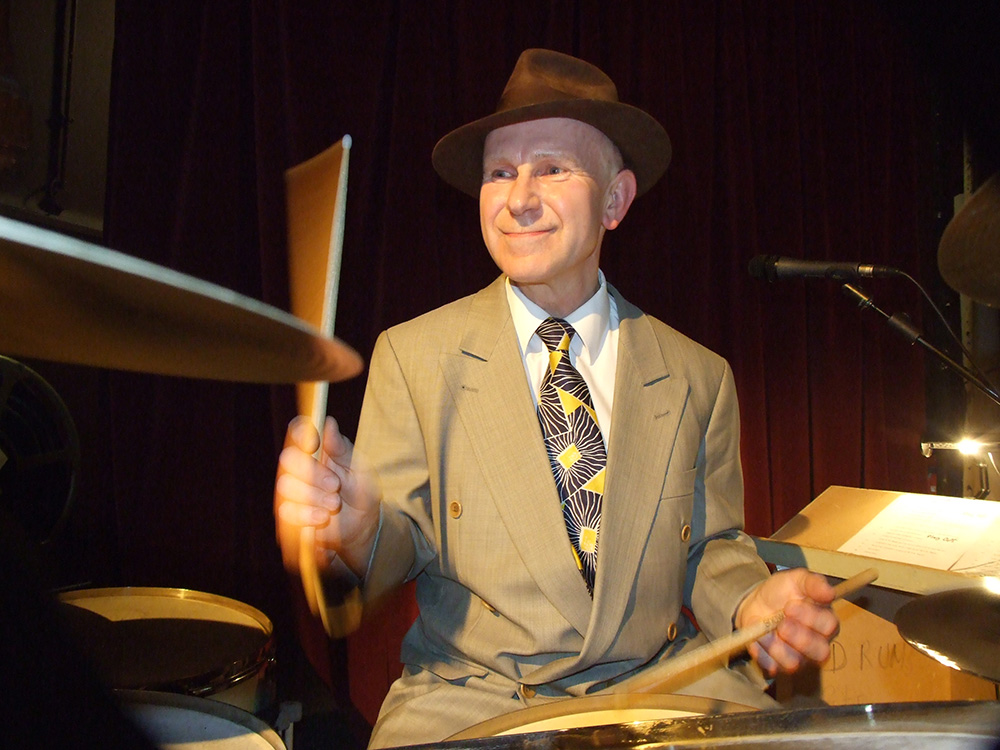 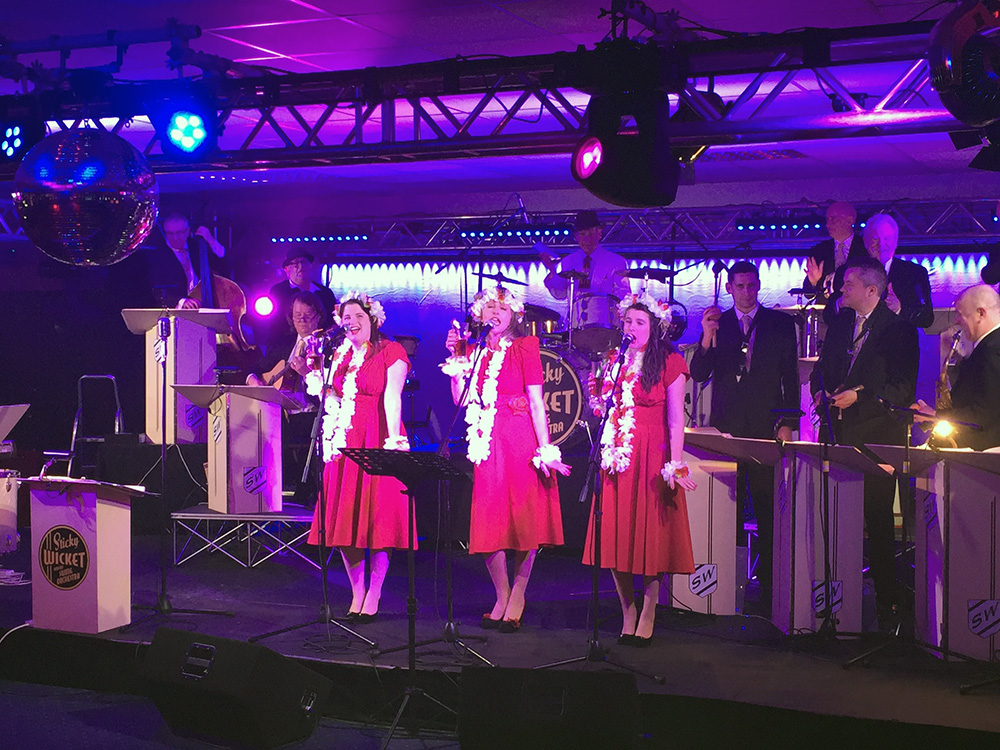 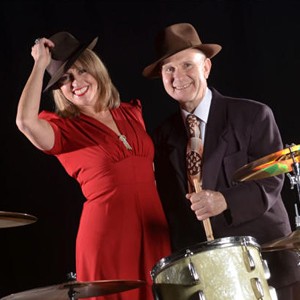 Most Alive Network artists travel UK wide and internationally. Get a guide price instantly by clicking the 'get quote' button and entering your event date and location. Make an enquiry and we will liase directly with 1940s Swing to confirm price, availability, and the provide you with a confirmed quote.

Wow your guests with a 14 piece band!

1930's, 40's & 50's Swing at its best. This dynamic band recreates all the excitement of the era with classic tunes and original arrangements. Entertaining Visual...... & they're great to dance to too!!

The Nine Piece Band was formed by 'Drummer Extraordinaire' Alan renowned for his entertaining ‘Drumnastic’ solos. His is undoubtedly one of Britain’s finest Drummer/Percussionists whose pedigree is beyond question having worked consistently with the greats such as: Chris Barber Steve Gibbons Lonnie Donnegan and Van Morrison to name but a few.

The band comprises of some of Britain’s finest young musicians and a chance meeting with vocalist Serena Howard-Douglas when she was appearing at Ronnie Scott’s completed the line up. Alan enthuses, “Serena is the most natural, entertaining, fun-loving vocalist you could wish to find……..….. with a great voice too!”

Debuting at The 100 Club, London in January 2001, literally “swingin” the audience, it was there that they were discovered by the organisers of the major Swing Dance events in the UK and are now considered by many to be the number one swing band to dance to. Equally, they are well received by discerning jazz audiences at festivals and concerts etc.

They have performed at major festivals & Swing-Dance events all over the UK, including The Savoy Ball, The Swing-Jam, Marlborough Jazz Festival, Stafford Jazz Festival, Lichfield Jazz & Blues, Trimdon Festival, Henley Regatta, Blenheim Palace, The Glitter Ball, Jitterbugs and, of course, regular visits to The 100 Club. Clients include: Birmingham Royal Ballet, Donnington Park, Abbey National Bank, Pro-Drive, Northampton Camber of Commerce and the BBC. The band also appeared on the BBC2 TV’s Homeground documentary 'We'll Meet Again', where they met up with The Jiving Lindyhoppers with whom they have since collaborated on stage shows. They have also performed on Radio 2 and many local radio stations.

What is swing?
To our mind swing is a feel thing, a groove, a danceable beat irrespective of the period or style. The swing era however, is generally accepted as being the period between 1935 and 1946 which was the hey-day of the great American big bands, from Duke Ellington, Chick Webb, Benny Goodman through Count Basie, Gene Krupa to Glen Miller and Woody Herman and many others; some of whom continued to swing on into subsequent decades. And the vocalists swung too-Ella Fitzgerald, Billy Holiday, Dinah Washington and of course Frank Sinatra ‘just too few to mention’.

Their music combines elements of all the aforementioned with a bit of ‘Boogie Blues’ thrown in for good measure; all intended to keep audiences ‘swingin and jumpin’! .. an irresistable combination.

Dancing to their music
Bringing on board some amazing dynamic stylistic dancers, from formal shows and TV appearance with international dance troop ‘The Jiving Lindy Hoppers’ to swing dance events, private functions and weddings, this band, like many bands of old is eminently for dancing; but it also has a big following at festivals and clubs with the discerning listening audiences.

Choosing 1940s Swing through the Alive Network was the best thing we did to ensu...

“Choosing 1940s Swing through the Alive Network was the best thing we did to ensure our wedding reception became the party we dreamed to hold for our guests. Lots of people have asked for Alive Network's contact details as a result.”

Paul Thanks for everything. The band were amazing!! Absolutely everybody was...

“Paul Thanks for everything. The band were amazing!! Absolutely everybody was talking about them after. They really made the night. They were all so nice too. They were a huge success. Thanks again. Eamonn”

Hi Mary, Thank you for your email. Alan and 1940s Swing were sensational. Bot...

“Hi Mary, Thank you for your email. Alan and 1940s Swing were sensational. Both we and our guests simply loved them. Not only is their music and general sound of a superb quality they were so professional and accommodating to our slightly adverse location and set-up! They simply got on with the job and you could see they genuinely wanted to be a part of our entertainment for that evening. A band was such an important part of our day and we spent some time deliberating over the kind of music we wanted and the bands available. You were so helpful in aiding our search and I thank you for your involvement. Whilst a band can sometimes be quite an additional cost to a wedding, Sticky Wicket and using Alive Network was more than worth it. They were simply sensational on the day. Please pass on my many thanks to the band. If we have a function in future or any of our friends do, we would most certainly have them back and use you. To that end I have already recommended a friend who ...”

Seth Sticky Wicket exceeded all our expectations. They were exceptionally hel...

“Seth Sticky Wicket exceeded all our expectations. They were exceptionally helpful and accommodating and did a great job in glossing over our own organisational shortcomings. In essence, the music was FANTASTIC and the entire band was nothing less than totally professional in every aspect of their involvement with the evening. There is talk of us running another show next year. If we do this then Sticky Wicket is already at the top of our list. Thanks for helping us out Robin Braithwaite”

“......we booked 1940s Swing for the 11th December and they were excellent - this is not just my opinion but lots of the attendees I have spoken to said the same thing. The dance floor was full all evening! ”