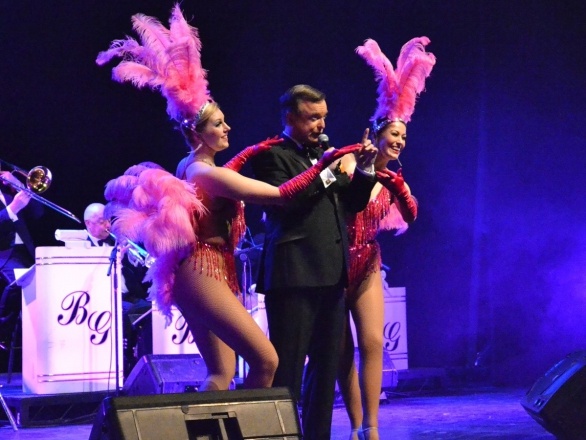 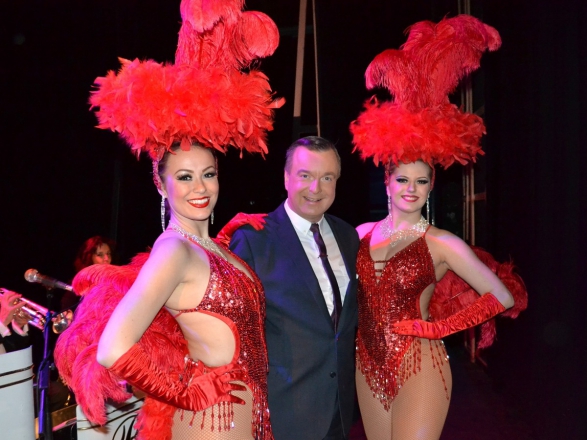 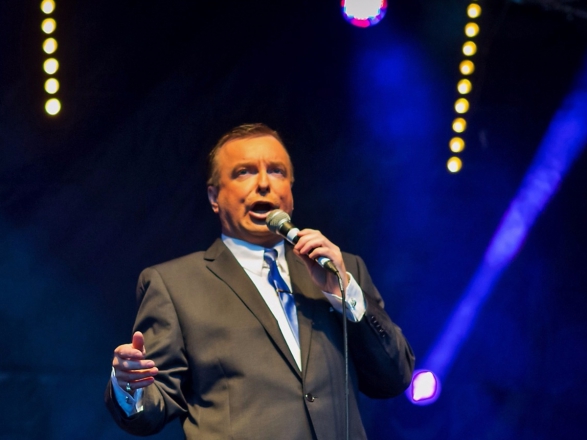 The Man And His Music

A truly remarkable show complete with Vegas Show Girls, The Man And His Music has been stunning audiences throughout the UK with what is one of the UK’s top tributes to Frank Sinatra.

Frank Sinatra Tribute The Man And His Music - Available from AliveNetwork.com

All The Way
Almost Like Being In Love
Around The World
Best Is Yet To Come
Chicago
Come Fly With Me
Come Rain Or Shine
Day In The Life Of A Fool
Everybody Loves Somebody
Fly Me To The Moon
For Once In My Life
Goin’ Out Of My Head
Guess I’ll Hang My Tears Out To Dry
How Do You Keep The Music Playing?
I Can’t Get Started
I Get A Kick Out Of You
I’ve Got A Crush On You
I’ve Got My Love To Keep Me Warm
I’ve Got You Under My Skin
I’ve Got The World On A String
It Had To Be You
It Was A Very Good Year
Lady In A Tramp
Leroy Brown
Let It Snow
Love And Marriage
Luck Be A Lady
Mack The Knife
Moon River
My Kind Of Town
My Way
Never Gonna Fall In Love Again
New York New York
Night And Day
One For My Baby
Our Love Is Here To Stay
Rat Pack Medley
Something
Something Stupid
Strangers In The Night
Summer Wind
Tender Trap
That’s Life
The Oldest Established
They Can’t Take That Away From Me
What Now My Love
Where Or When
Witchcraft
You Are The Sunshine Of My Life
You Make Me Feel So Young
Your Nobody 'Til Somebody Loves You

NEW! Christmas Repertoire!
White Christamas
I've Got My Love To Keep Me Warm
Let It Snow
Sleigh Ride
Silver Bells
Winter Wonderland
Jingle Bells
Look a Lot Like Christmas
I'll Be Home For Christmas
The Most Wonderful Time Of The Year
Silent Night
Christmas Memories
Have Yourself A Merry Little Christmas

A score of 100 wouldn't be high enough, he was amazing

“This artist is superb. Close your eyes and you'd think it was Frank. Absolutely superb! A score of 100 wouldn't be high enough, he was amazing. worth every penny!”

Absolutely superb. Arrived and set up on time.

“Absolutely superb. Arrived and set up on time with Dean Martin in tow which was an added extra. He looked extremely sharp and professional. All my guests were extremely impressed with their performance. Very happy with the service and have recommended Alive Network and Frank Sinatra to my friends and family. ”

Just to say what a fantastic Night we had with Frank Sinatra The Man And His Mus...

“Just to say what a fantastic Night we had with Frank Sinatra The Man And His Music. He was amazing and the Band were equally as good!! We had a lot of Sinatra Fans who were blown away by his singing and the backing band. Many thanks.”

A resounding success with all the guests including several die-hard Sinatra fans...

“A resounding success with all the guests including several die-hard Sinatra fans. Interaction with the guests was brilliant if anything the applause interfered with hearing the act at times. Book him before he moves to Las Vegas!!”

The Man + his music seemed to have somehow imbibed the very essence of ‘ole blue...

“The Man + his music seemed to have somehow imbibed the very essence of ‘ole blue eyes’ before coming on stage. His performance was breathtaking - seriously! The tone, the modulation and the rhythm in his voice throughout the evening was genuine Sinatra. His masculine charm was also apparent in his pristine characterisation and it was with effortless charisma he strolled into the audience and sang I’ve Got You Under My Skin while chatting and engaging with the ladies - just like the icon." ”

Most Alive Network artists travel UK wide and internationally. Get a guide price instantly by clicking the 'get quote' button and entering your event date and location. Make an enquiry and we will liase directly with (Frank Sinatra) The Man And His Music to confirm price, availability, and the provide you with a confirmed quote.

to cater for larger line ups

Have Marilyn Monroe join Sinatra on stage to sing some of their classics.

Minimum of 2 plug sockets within easy reach of performance area

*Dependant on budget, The Man And His Music can also include an orchestra of anywhere from 3, to 35 musicians.

Please note: This artist is not available on New Year's Eve.

The Man And His Music's frontman David, has had a long career in the entertainment business. It all started at London's prestigious Italia Conti Academy of Music and Dramatic Arts where he trained for three years. This prepared him for many acting roles and a spell with the respected 'Break a Leg' touring theatre company. David's favourite role was as the drunken (it was real alcohol!) Doc Pearce in 'Calamity Jane' directed by Chris Wallis at the famous Unicorn theatre in the heart of London. During this period David also appeared in various pantomimes throughout the country. Television appearences include 'Lovejoy' and 'Inspector Allan' for the BBC and most recently 'Never Never' for Channel Four.

However it is as a cabaret performer that David is best known and particularly for his tribute to the legendary - FRANK SINATRA.

Initially David was part of the popular duo playing cocktail music for corporate events, hotels and restaurants. Then as a solo performer he appeared with his own trio at many jazz venues across Britain. This trio featured the cream of British jazz: Bobby Worth, Brian Dee and Matt Miles and was often augmented by the likes of Digby Fairweather and Spike Robinson. Around this time David headlined to wide acclaim at the world famous Cafe Royal - Green Room he went on to spend some time as compere at the venue and it was during one of these engagements that Las Vegas legend Buddy Greco said of David This guy really is Sinatra!

As an accomplished compere David went on to fill the same role at Chaplins night-club in London's West-end and followed this with a season at The Westlodge in Upminster. David has also appeared as a guest vocalist with stars such as the late Ruby Murray, Lionel Blair, George Williams, Charlie Smithers and the Beverley Sisters.

He has completed various seasons including British Holidays and Shearings Hotel group and is proud of his association with Noel Edmonds Airbourne Charity.

In the recording arena David was a featured vocalist at the age of only seventeen on the album 'Here's to the band' featuring Don Lusher, Kenny Baker and a full orchestra conducted and produced by Nick Ingman.

Known on the circuit as Britains Number one tribute to Ol' Blue Eyes, frontman David has toured Britain, Denmark and Sweden with his show 'The Man And His Music'. More appearances followed with Charlie Moon's theatre tribute to The Rat Pack and a sequal to this starring David as Sinatra with tributes to Sammy Davis, Dean Martin and Judy Garland from 'Stars in Their Eyes' premiered at the Thamseide theatre in Grays last year.

Constantly in demand as Sinatra, David recently played to 5000 people at an event sponsored by Nortel at the prestigious Alexandra Palace in London. This was followed by a sell-out show with Nova Casper as Tina Turner and Gerry Trew as Rod Stewart - 'TINA, ROD & FRANK' at The Dominion Theatre in London's West-end. Most recently David has toured as Sinatra in the Production of The Rat Pack and was featured by The Sun Newspaper for the phone in version of Mandelson's Way - (My Way with new lyrics by Richard Littlejohn).

As a result of his incredible similarity to Sinatra's voice, David has been used as Frank Sinatra in various radio advertising campaigns and he has been seen by millions of television viewers on 'London Tonight' and 'Barrymore' for ITV. Before David's performance of 'The Lady is a Tramp' with a big band led by Don Hunt on the popular Barrymore show, Michael introduced him as Britain's answer to Harry Connick Jnr.

This compliment has a lot of fact in it, as both Harry and David have achieved so much at still a relatively young age and both are keeping the music of Sinatra and the other great swing/jazz singers of the twentieth century alive.

Your Event
The Man And His Music can provide background music in the form of general jazz classics for no extra charge. This is between sets only and maintains a mellow and classy mood, making your event run smoothly from start to finish.

His recording of New York New York is too close to the original as recorded by my Father - Nancy Sinatra - in a letter to Atari regarding a recording that David made for them with a 35 piece orchestra.

Please note: The Man And His Music is available worldwide, however a PA system may have to be provided by bookers outside of England and Wales. Please speak to an Alive Network booking agent for more details.

See more artists like The Man And His Music

After booking, speak directly with The Man And His Music.