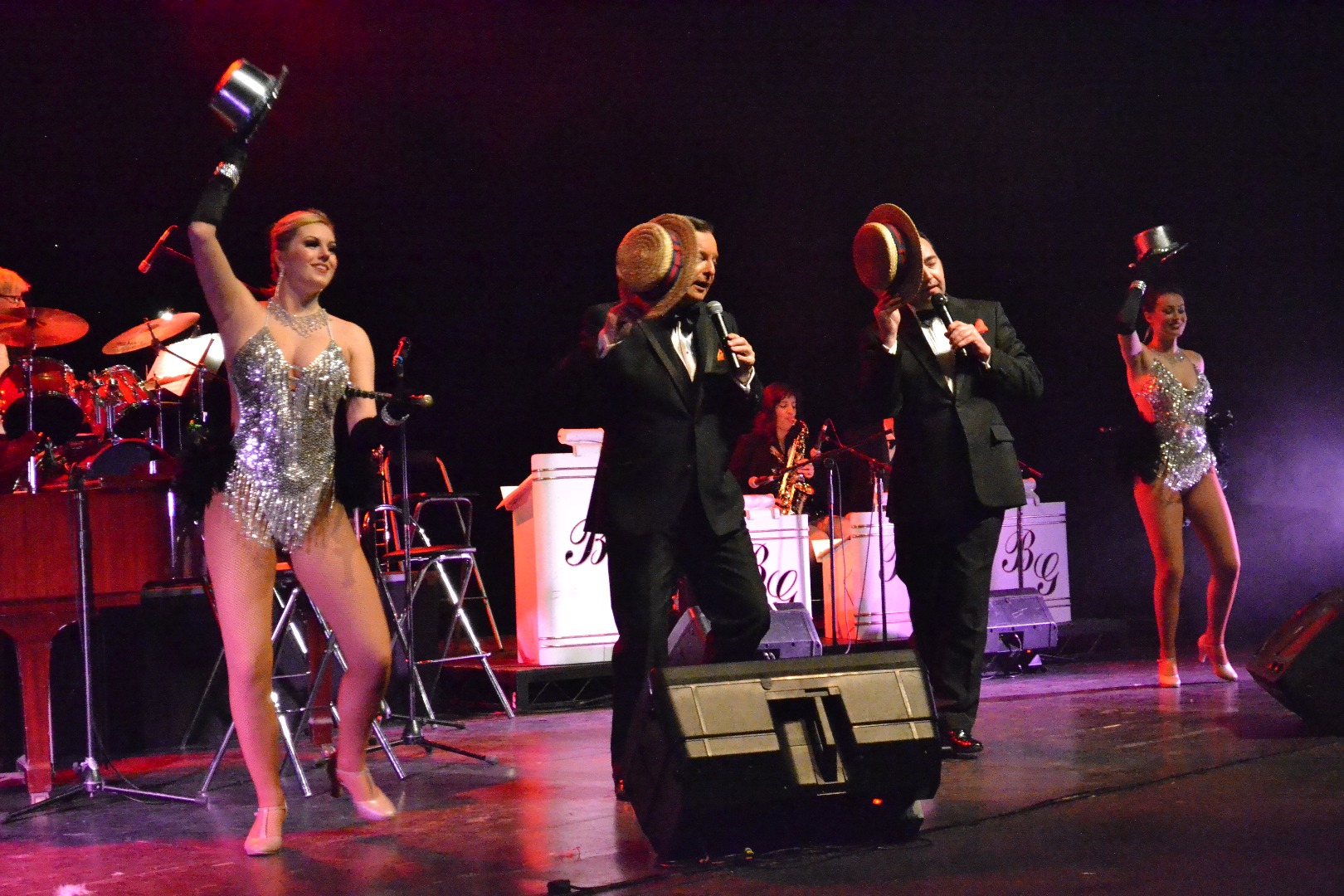 Sinatra and Martin Live perfectly captures the wonderful music, personalities & comedy of the original legends! With showgirls & a swinging big band also available, this authentic show will take you back to one of Frank & Dean's legendary parties!

NEW! Christmas Repertoire!
White Christmas
I've Got My Love To Keep Me Warm
Let It Snow
Sleigh Ride
Silver Bells
Winter Wonderland
Jingle Bells
Look a Lot Like Christmas
I'll Be Home For Christmas
The Most Wonderful Time Of The Year
Silent Night
Christmas Memories
Have Yourself A Merry Little Christmas
The Christmas Song

“The performance was brilliant and got people up and on their feet which is quite an achievement for our company. Would absolutely recommend them. They were very professional and added to our New York theme perfectly”

The guests were super impressed with all of you and the selection of songs playe...

“We would love to say a massive thank you to yourself, Dean Martin tribute and the band for your amazing performance on our wedding day. The guests were super impressed with all of you and the selection of songs played and we would also like to thank you for incorporating our chosen songs within your play list. The performances were incredible and it really lifted the entire mood for the day and was a lovely touch to compliment our wedding breakfast. It sparked up a really positive reaction amongst our guests and we thought you were fantastic. Thanks to all of you for being part of our special day. You both really captured Frank Sinatra and Dean Martin and we honestly thought we were listening to the real thing, amazing. You did a fantastic job and we couldn’t have asked for more.”

Most Alive Network artists travel UK wide and internationally. Get a guide price instantly by clicking the 'get quote' button and entering your event date and location. Make an enquiry and we will liase directly with (Frank Sinatra and Dean Martin) Sinatra and Martin Live to confirm price, availability, and the provide you with a confirmed quote.

From a quartet to 20 piece orchestra per musician

Cabaret Colours with other effects

Highlights
*Authentic Sinatra and Martin show!
*Capturing the music, the personalities & the comedy of the original legends!
*Including hits such as The Lady Is A Tramp, My Way, New York New York and many more!
*Swinging big band and Vegas showgirls also available!

From the Producers of “The Rat Pack is Back” - Britain's original and longest running tribute to Frank Sinatra, Dean Martin and Sammy Davis...

Sinatra and Martin Live perfectly captures not only the wonderful music and comedy of the original legends, but also the remarkable personalities of the stars who ruled the world of entertainment from The Sands Hotel in Las Vegas during the sixties.

Featuring some of Britain's premier tribute artistes this outstanding production accurately recreates the legendary performances of the pre-eminent entertainers of their time. With amazing accuracy, the performers not only sing like their heroes, but also share their unique mannerisms, physically resemble them on stage and even talk like they are at the Sands taking part in one of Frank and Dean’s legendary parties!

With high quality backing tracks as recorded by a live big band, the show includes all of the hit songs made popular by the legendary performers such as "Ain’t That A Kick In The Head", "The Lady Is A Tramp", "My Way", "Amore” and of course, ‘New York New York’.

Frank and Dean's Big Band
Sinatra and Martin Live can be backed by their own swinging big band led by Mr Don Hunt. Mr Hunt has served as Bruce Forsyth’s musical director for over thirty years and during an amazing career has held the same role for the likes of Anthony Newley, Bing Crosby and even the real Sammy Davis Jnr!

Many sizes of band are available, from a quartet to a 20 piece orchestra. Please see booking options or speak to your booking agent for more details.

The Vegas Showgirls
For the full Frank and Dean experience, why not have some Vegas Showgirls! Fully costumed, these fabulous dancers will bring you a unique night- Vegas style! Please see booking options or speak to your booking agent for more details.

Meet Sinatra and Martin
David Alacey plays Frank Sinatra in the Sinatra and Martin Live show. After working with the Vegas Legend - Buddy Greco, Buddy was moved to say that "This Guy Really is Sinatra" - quite a complement! But even this did not come close to the comment by Frank's daughter Nancy who said that David's recording of "New York New York" with a 35 piece orchestra for a new Atari PC game was "too close to my father’s recording" It really doesn't get better than that!

Paul Drakeley performs as Dean Martin and, like his hero, is also half Italian! The highlight of Paul's career was when his band was chosen to perform at a concert held at The Royal Albert Hall and he was asked to sing the Dean Martin classic "Volare" to over five thousand people. He was also honoured to be selected as a finalist in the prestigious "BBC Musician Of The Year" competition. Since then has worked all over the world as Dino.

"These guys are fantastic"
- Dannii Minogue

"David Alacey not only looked like Frank but he had the drawl, the wit and boy could he nail a tune and from looks to voice, Paul Drakeley was every inch the real deal as Dino!"
- Uxbridge Gazette

"You guys really are TOP of the premier league! Your shows gets even better every time that we book you!"
- Karen Brady, CEO West Ham United FC

“Alacey seemed to have somehow imbibed the very essence of ‘ole blue eyes’ before coming on stage. His performance was breathtaking - seriously! The tone, the modulation and the rhythm in his voice throughout the evening was genuine Sinatra. His masculine charm was also apparent in his pristine characterisation and it was with effortless charisma he strolled into the audience and sang I’ve Got You Under My Skin while chatting and engaging with the ladies - just like the icon.

Drakeley, an endearing Dino, also hit the mark giving an authentic Italian- American edge to his accent and a firm nod to his fondness for the liquor. His vocal was smooth and enticing and when he sang Ain’t That A Kick In The Head, he enchanted the audience with his easy chit-chat and laid-back vocal style”
- The Edinburgh Herald & Post

After booking, speak directly with Sinatra And Martin Live.