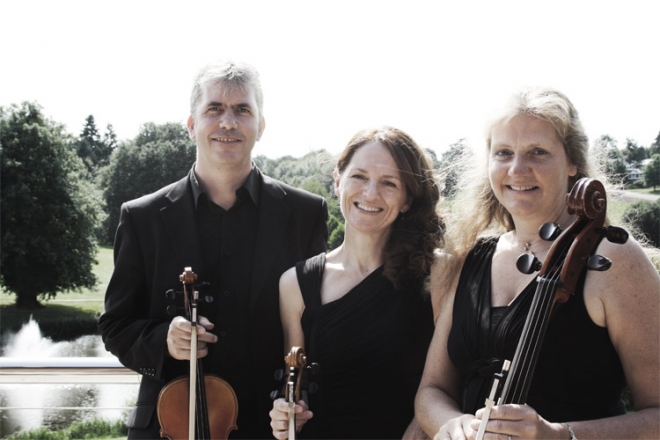 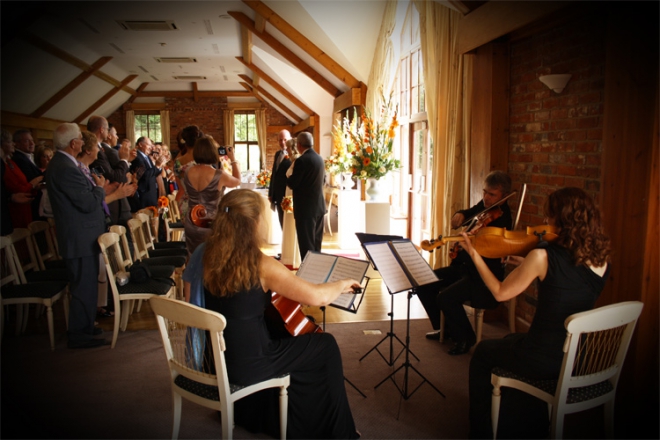 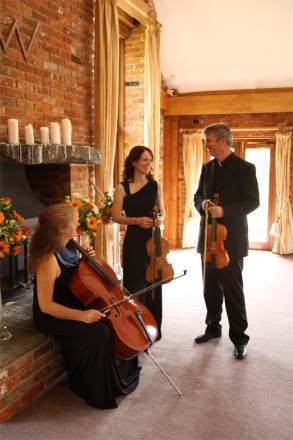 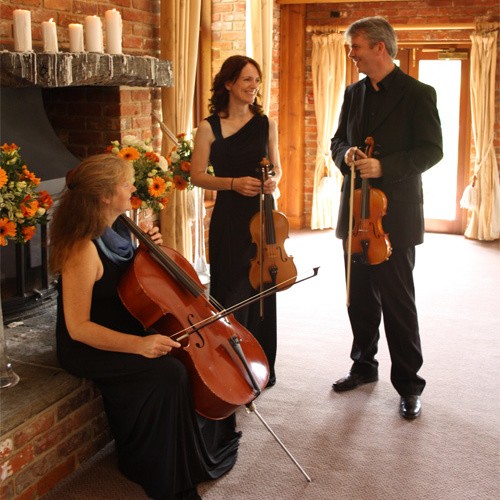 Brilliant violin, viola and cello string trio combining classical with contemporary music. From Bach to The Beatles and Pachelbel to Gershwin. Based in London, their smaller ensemble size means they are perfect for petite budgets and venue spaces!

Film, TV and Show Tunes
City of Stars (La La Land)
Theme from Game of Thrones
I Dreamed a Dream (Les Miserables)
Tale as Old as Time (Beauty and the Beast)
Theme from Gladiator (Now We Are Free)
Benny Hill Theme Tune (Yackety Sax)
Theme from The Godfather
Theme from Game of Thrones
Nobody Does it Better
Now we are Free
Theme from Anne of Green Gables
Somewhere over the Rainbow (The Wizard of Oz)
The Rose
Theme from Star Wars
Theme from Eastenders
As the World falls Down
Antiques Road Show
Theme from Jurassic Park
Theme from Skyfall
Theme from True Romance (You're So Cool)
Medley of Les Miserables tunes
I Could Have Danced All Night (My Fair Lady)
On the Street Where You Live (My Fair Lady)
Embassy Waltz (My Fair Lady)
Music of the Night (Phantom of the Opera)
Love Changes Everything (Aspects of Love)
Potter Waltz
Harry Potter medley
Portuguese Love Theme (Love Actually)
Glasgow Love Theme (Love Actually)
Theme from Titanic
Theme from You Only Live Twice
Theme from The Godfather
Theme from Out of Africa
As long as He Needs Me (Oliver)
Food Glorious Food (Oliver)
Where is Love? (Oliver)
As Long as He Needs Me (Oliver)
I'm Reviewing the Situation (Oliver)
America (West Side Story)
Maria (West Side Story)
There’s No Business Like Show Business (Annie Get you Gun)
The Entertainer (The Sting)
Cavatina (Deer Hunter)
Can You Feel the Love Tonight (Lion King)
A Dream is a Wish Your Heart Makes (Cinderella)
Bare Necessities (Jungle Book)
Colours of the Wind (Pocahontas)
A Whole New World (Aladdin)
You've Got a Friend in Me (Toy Story)
You'll Never Walk Alone (Carousel)
Music of the Night (Phantom of the Opera)
My Favourite Things (Sound of Music)
Edelweiss (Sound of Music)
This Nearly was Mine (South Pacific)
Big Spender (Sweet Charity)
Moon River (Breakfast at Tiffany’s)
Surrey with the Fringe on Top (Oklahoma!)
But Not for Me (Four Weddings……)
What Kind of Fool (Stop the World)
Summertime (Porgy and Bess)
Is you Is (Five Guys Named Moe)
Getting to Know You (The King and I)
Feed the Birds (Mary Poppins)
This is a Lovely Day (Bless the Bride)
Por una Cabeza
HMS Pinafore medley
Pirates of Penzance medley
Winnie the Pooh
Ev'rybody wants to be a Cat
Cruella de Vil
When you wish upon a Star
I need a Boat
All Creatures Great and Small
Theme from Fawlty Towers
Theme from Match of the Day

Popular
Love Me Like You Do
Don't Stop Believin'
Only Time (Enya)
Viva La Vida
The Scientist
I'm Yours
Love of My Life
You're Beautiful
Time After Time
Isn't She Lovely
How Long Will I Love You
You Are The Best Thing
Another One Bites the Dust
Run For Your Life
At Last - Etta James
A Thousand Years - Christina Perry
Love of My Life
Beneath Your Beautiful
Hoppipolla
Fairytale
A Sky Full of Stars
One day like this
All of Me
Angels Robbie Williams
Angels XX
Baby I'm Amazed by You
Thank you for Loving Me
No Place I'd Rather Be
Let's Get Married
I'd Do Anything for Love
You Raise Me Up
Somewhere Only We Know
This Will Be (An Everlasting Love)
Marry You
Wherever You Will Go
Paradise
You've Got the Love
A Whiter Shade of Pale
Everything I Do
Groovy Kind of Love
Truly, Madly, Deeply
Runaway
Your Song
Guiding Light
Money Money Money
On the Wings of Love
It Must be Love
Live Forever
This Love
She will be Loved
Love of My Life
My Immortal
Kissing You
Yesterday
When I’m 64
All you Need is Love
Michelle
All My Loving
Fixing a Hole
Here, There and Everywhere
All Shook Up
Walk Don't Run
Scott Joplin Rags, including The Entertainer
Don’t it Make My Brown Eyes Blue
All I have to do is Dream
Puppy Love
You’ll Never Walk Alone
Danny Boy
You Can't Hurry Love
Smoke gets in you Eyes
Stand by Me
Bring Me Sunshine
Bittersweet Symphony
Universal
Annie's Song
But not for Me
She
Frankie and Johnny
New York, New York
Time to say Goodbye
My Way
All I have to do is Dream
Nothing Else Matters
The Way you make me Feel
Take my Breath Away
Louise
Country House
My Boy Lollipop
God Only Knows where I'd be without you
Better Together
Sealed with a Kiss
Iris
Hippopotamus Song
Sweet Child o' Mine

“From start to finish, City String Trio were fantastic. Booked for our wedding, they were promptly in touch in advance of the bid day, highly organised and incredibly talented. Most of all, they learned an entirely new piece of music for our processional - the theme from Up (which was amazing) - and took requests from our guests on the day. We were so pleased they could play for us!”

Everyone commented on how great they were!

“The music in our ceremony and drinks reception was truly amazing! A great mix of classical, Disney and film music throughout and all our guests kept commenting on how great it was - they loved it and it really created a great atmosphere. Thank you for playing on our special day!!”

“We had the pleasure of the City String Trio peform at our wedding and they were outstanding, from the communication beforehand to the performance on the day. Highly recommended! we had so many comments from our during the day and afterwards.”

Amazing addition to our wedding day

“The City String Trio were a fantastic addition to our wedding day. With the ability to play classical, pop and everything in between, they helped set the tone for our ceremony, and were also able to play a 'bespoke' request brilliantly, too. I would categorically recommend them.”

A pleasure having them perform at our wedding

“Faultless and classsy performance with good mix of music played. Many positive comments received by our guests. Perfect for starting a wedding reception and very personable group members. It was a pleasure having them perform at our wedding”

Most Alive Network artists travel UK wide and internationally. Get a guide price instantly by clicking the 'get quote' button and entering your event date and location. Make an enquiry and we will liase directly with City String Trio to confirm price, availability, and the provide you with a confirmed quote.

City String Trio have a wide and ever-increasing repertoire that is appropriate to be performed at all occasions - weddings, parties, corporate events, anniversaries, etc.  The live music created by City String Trio will lend a particular intimacy to your ceremony and certainly add a touch of class.

They will liaise with you over the choice of music and pride themselves in selecting pieces to create the perfect atmosphere.  City String Trio provide a beautiful backdrop to every occasion.

Edward Morton took up the violin at the age of four under the tutilage of Teddy Bor and later continued his studies at the Royal College of Music, London. He studied with various professors including Bernard Newland, Christopher Warren Green, Hugh Bean and Suzanne Rosza. He has had a long interest in contemporary music, developing his techniques for performance with Oliver Knussen. He was a founding member of the Parke Ensemble, a contemporary music group based in London, with whom he worked with such eminent composers as Judith Weir. He now performs exclusively with The City String Trio.

Diana Bailey studied the cello at the Guildhall School of Music and Drama, London, where her professors included Stefan Popov and Raphael Wallfisch. Her studies included extensive training in chamber music under the direction of Gordon Back and Paul Berkowitz with whom she specialised in piano trio performance. As well as working with the City String Trio, she is also an accomplished pianist and clarinettist.

Sarah Blundell studied the viola at the Royal College of Music, London and The University of Surrey prior to a period of training in performance at Goldsmiths College, University of London. Her viola professors included Eileen Engelbrecht, William Padel and Roger Best. Following extensive performance of chamber music with both small and large ensembles coached by experts including Sebastian Forbes and Norman Del Mar, she now devotes her energies to performance with The City String Trio.

Live music always helps to develop a fun and lively atmosphere for your guests and we recommend that you give it a try!